PM to witness MoU between Mida, BIA in Brunei

Anwar is scheduled to have an audience with the Sultan of Brunei on Jan 25 and will also witness the signing of an MoU between Mida and the Brunei Investment Agency. – BERNAMApic

BANDAR SERI BEGAWAN: Prime Minister Datuk Seri Anwar Ibrahim will be witnessing the signing of a memorandum of understanding (MoU) between the Malaysian Investment Development Authority (MIDA) and the Brunei Investment Agency (BIA) during his two-day official visit to Brunei, starting tomorrow.

Minister of Foreign Affairs Datuk Seri Dr Zambry Abdul Kadir said the MoU is a follow-up to the Sultan of Brunei’s Special Visit to Malaysia on Nov 28, which took place just after Anwar was officially appointed as Prime Minister of Malaysia.

"It will provide an opportunity for both countries to explore potential investments that are of mutual interest,” he told reporters in a briefing here today.

Meanwhile, he said the trade between Malaysia and Brunei recorded an increase from 2021 to 2022 and the latter is the country’s 26th largest trading partner and sixth largest in ASEAN with total trade amounting to RM13.22 billion in 2022.

The official visit to Brunei is the second foreign visit for Anwar since assuming the position of prime minister.

He is expected to arrive at Brunei International Airport at approximately 3.30 pm tomorrow. - Bernama 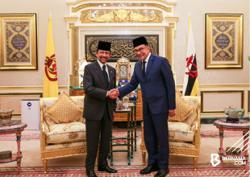