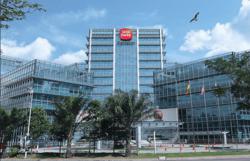 (SDP) plans to review its near-term 2030 targets and longer-term 2050 targets that were submitted to Science Based Targets initiative (SBTi) on Nov 10, 2022, by the second quarter of this year for a full validation.

During SDP’s net-zero webinar yesterday, its chief financial officer Renaka Ramachandran said the company had completed scope one and scope two baselining way back in 2011, proving its commitment to environmental, social and governance (ESG).

However, looking back at it, the group realised the need to consider the importance of scope three, leading it to re-baselining using the latest available feature as of 2020.

“During the process of doing that, we will look at issues like the footprints for non-forest, land and agriculture guidelines (Flag),” Renaka said during her opening remarks at the webinar, moderated by SDP head of downstream sustainability Mark Wong.“Hence, we had to review and revisit our baselining and make it ready for submission to SBTi, which we are proud to say that we have actually done,” she added.

Sharing his opinion during the webinar, Nestle head of climate and sustainable sourcing, ESG strategy and deployment, Benjamin Ware, said companies should look at carbon offset, or referred to as soft assets, as a new stream of revenue, in addition to revenue from their physical assets.

He believes companies should be able to capitalise on the soft asset to bring more value to their companies.

“So, it is not only a fantastic opportunity to do good to the planet, but also to generate an additional revenue stream,” he added.

However, Ware believes the first two or three years for the journey of carbon offsetting is going to be a difficult one, regardless of the companies.

He said companies would need to implement practices which are most likely going to slightly drop their respective yields, fuelled by investments into infrastructure, along their journey of carbon offset.

“However, this is where you need to have investors or banks, the government and clients, helping you for this ecological transition quickly,” Ware said.

CDP South-East Asia and Oceania science-based targets engagement manager Dedy Mahardika said about 4,300 companies around the world have joined the SBTi, with 20% or almost 450 companies from Asia.According to him, there are 17 Malaysian companies who have tagged along the initiative.

The SBTi is a global body enabling businesses and financial institutions to set ambitious emissions reductions targets, in line with the latest climate science.

“We see, of course, a lot of uptick from Asia and hopefully by the release of Flag guidance, we can see more companies joining the initiative,” Dedy said at the webinar.

According to Dedy, the group is developing a new monitoring and reporting platform, including verification, where companies would be able to showcase their progress towards SBTi.

“With scope three being a deep problem, we are also developing a toolkit, which will help companies to also align with their suppliers and reach the net-zero target,” he added.

Concluding the webinar, SDP’s chief sustainability officer, Rashyid Redza Anwarudin, said among the key actions for the palm oil industry to significantly reduce emissions is through the elimination of deforestation throughout the supply chain and ensuring no new development on peat land.

Additionally, he sees a need to enhance the approach to land use by looking into reforestation of unproductive areas, and ensuring effective solutions to manage emissions from peat would be the way to go as well.