“We’ll continue to look for a way to create value there,” Bakish said, adding the Showtime brand still matters. — Bloomberg

LOS ANGELES: The head of Paramount Global says it no longer makes sense to run its Showtime premium cable network as a standalone operation, citing the growing financial pressure on the TV industry.

Chief executive officer Bob Bakish said at an investor conference that Paramount was looking at “consolidation economics” at Showtime and how to “unlock synergies” between the channel and the company’s broader portfolio, including the newer Paramount+ streaming service.

Paramount already has plans to bring together the streaming infrastructure for Showtime and Paramount+, he said, adding that offering Showtime inside the Paramount+ app “really works well”.

“We’ll continue to look for a way to create value there,” Bakish said, adding that the Showtime brand still matters.

“It’s transformation. It does affect people.”

Paramount’s plans for Showtime are part of a series of cost-cutting initiatives at the company, accelerated by a decline in advertising and the continued loss of cable-TV subscribers. 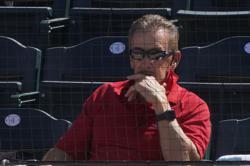