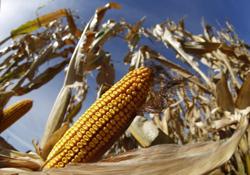 Stable supply: A farmer harvests wheat in Oklahoma. The US Department of Agriculture’s statistics service Tuesday rated 34% of the winter wheat crop as good or excellent, the highest 2023 rating so far. — Reuters

WIDESPREAD and worsening drought in the United States clipped summer yields earlier this year and it now stands to limit output of winter wheat, which is heading into dormancy in near-record poor health.

The worst conditions for winter wheat are currently found in Plains states that suffered the largest losses among corn and sorghum crops, as well as the previous winter wheat harvest, raising concern for grain supplies in these areas.

Exports are of less concern at the moment since the United States share of world trade has shrunk.

The US Department of Agriculture’s statistics service Tuesday rated 34% of the winter wheat crop as good or excellent (GE), the highest 2023 rating so far.

That was up two percentage points on the week, and much better than when conditions began in late October at 28% GE.

That 2012 rating had been the lowest ever pre-winter score for any week before this fall, so the 2023 crop is far from safe.

But the floor may have crept upward last week with decent rainfall in parched areas of the Southern Plains, and reduction in the poor-to-very poor (PVP) category is the true story of last week’s conditions.

That dropped seven points as of Sunday to 26% PVP, tying with 2012 as the week’s worst.

Tuesday’s Crop Progress was the last national report until early April, though most states release reports at least monthly throughout the winter.

Spring conditions, not fall ones, are the best determinant of crop outcomes but the start is undoubtedly concerning.

There have been four years in the past 20 when late fall US winter wheat conditions improved by more than five percentage points in the early spring.

It is less likely for conditions to plunge from fall to spring if fall conditions were already low.

The lowest late November rating to end up even lower in early April was 44% GE, observed for the 2022 and 2002 harvests.

However, that rating is among the lowest ever recorded in late fall.

The initially poor 2021 and 2000 crops have common ground in that conditions improved by spring, and the yields eventually turned out OK.

Winter wheat improved 18 percentage points from fall 1999 to early April 2000, a record-large jump. The 2021 crop added 10 points during that period.

But things can go the other way, too.

The worst fall-spring downfall in ratings came in 2014, when 62% GE in late fall turned into 35% by April, eventually leading to one of the worst yield outcomes in recent memory.

The 2000, 2014 and 2021 ratings trends are very easy to explain. Take the largest US winter wheat state, Kansas, located in the Southern Plains where rainfall patterns can be sporadic.

March is a very critical month especially in the Plains because it is much wetter than the previous months and coincides with winter wheat’s emergence from dormancy.

In Kansas, average rainfall from December through February is only slightly heavier than in March alone.

Drought in the Plains does not often break in the winter, placing emphasis on March and even April.

That is true this year beyond just wheat production, as heavy corn producer Nebraska faced steep yield losses, and farmers in those areas very much need good luck in the spring to lift summer 2023 prospects.

The Southern Plains may remain drier than normal during this winter under La Nina, though the pattern could shift if La Nina departs earlier than expected, which some forecasters predict could happen. — Reuters