Capital support: Adani, through his flagship company Adani Enterprises Ltd, is seeking to raise 200 billion rupees (US$2.5bil or RM11.3bil) by selling new shares. The additional firepower may come in handy to beef up its fledgling super-app. — AFP

GAUTAM Adani is ready to unveil his much-hyped super-app, made by an in-house startup he wants to be “the Ferrari of the digital world.”

The portal will take off in the next three to six months, Asia’s richest tycoon told the Financial Times in a recent interview.

But Adani seems to have missed the sweet spot when demand for online services boomed during the pandemic. Now, the tech industry is in turmoil globally.

Meanwhile, competition in Indian eCommerce is intense. Will Adani’s Ferrari get stuck in bumper-to-bumper traffic?

The mobile app will connect passengers at Adani’s network of airports with other services offered by his group, the FT said. That could be the easiest way to build up downloads.

Adani runs seven Indian airports, and is currently building a new terminal and runway for Mumbai’s second facility. Overall, 20% of the nation’s aviation traffic goes through him.

If Adani were to throw in a free ride home – he’s also investing in taxi fleets in cities where he has airports, according to media reports – he potentially gets to install his as-yet-unnamed app on millions of phones.

That’s just the first battle. The second will be trickier – to make consumers come back for other things.

Aggregating shopping, payments, entertainment, social media and finance in one place is the Chinese model.

The likes of Alibaba Group Holding Ltd, Tencent Holdings Ltd and Meituan perfected it before Beijing got nervous about the dominance of its tech titans and made them a target of strong antitrust action.

In South-East Asia, where the template was copied successfully, investors are now demanding profitability ahead of expansion.

GoTo Group, the Indonesian behemoth formed through a merger of ride-hailing provider Gojek and eCommerce firm Tokopedia, is cutting 12% of its workforce.

If the regional outlook is challenging, evidence from India isn’t very encouraging, either.

eCommerce is undoubtedly a success, with Walmart Inc’s Flipkart and Amazon.com Inc’s India websites controlling the bulk of a growing market – more than 60% of the billion-plus visits to the Flipkart site during its eight-day Big Billion Days festival last quarter came from Tier-2 and 3 cities.

But with the economy reopening, some of the more niche categories that had gained popularity during the pandemic – such as education and beauty and fashion – are either fizzling out or aren’t growing as strongly as before.

Amazon is shutting down its test prep business in the country and exiting meal delivery. Paytm, India’s largest digital-payments provider, has seen shares drop 75% in one year since its initial public offering (IPO), the worst first-year performance for a large IPO in a decade, according to Bloomberg News.

Online grocery shopping is ramping up but Adani’s rivals – Tata Group’s Big Basket and Mukesh Ambani’s JioMart – have an early lead in what is seen as a key hook to boost customer interactions.

Pharmacies are growing fast, and here, too, Ambani’s Netmeds and Flipkart’s Health Plus are doing well. Adani’s consumer-facing web presence is limited.

The Ahmedabad-based group picked up a significant minority stake a year ago in Flipkart-owned travel booking site, Cleartrip. All the more reason to make transport the fulcrum of its super-app ambitions.

How fast can Adani hope to grow? With the exception of airports, power and city-gas distribution and edible oils, the rest of his empire has a strong focus on mining, logistics and infrastructure, which don’t necessarily offer too many avenues to connect with end-consumers.

Even for the 154-year-old Tata Group, which is into everything from salt and tea to cars and airlines, getting a lock on customers in the digital world is proving to be hard work.

Tata Neu, the super-app around Big Basket, has been downloaded about 15 million times, according to Apptopia data cited in a Macquarie Capital research note last week.

That’s a modest number in a country where there will be one billion smartphone users by 2026.

Tata Neu won’t be the only competition to beat. Adani’s bigger rival will be Ambani, who built his digital moat during the pandemic when money was pouring into tech.

Asia’s second-richest businessman has access to 428 million telecom users, through his Jio mobile network. Ambani is also India’s No. 1 retailer and is expanding into financial services.

Credit is the glue that holds a successful super-app together, or at least that has been the experience elsewhere in Asia. However, making money off it is hard.

That translated into a US$104mil (RM468.5mil) earnings before interest, taxes, depreciation, and amortisation loss compared with a profit from delivery and ride-hailing, the other two units of the Singapore-based super-app.

Expect Adani to be aggressive in trying to close the gap with his rivals.

The additional firepower may come in handy to beef up the fledgling super-app.

Media reports suggest that Adani may butt heads with Ambani as India’s bankruptcy court looks for a new owner for Future Retail Ltd, a large, insolvent Indian retailer. Such bolt-on acquisitions may make more sense than trying to build new businesses from scratch.

As long as investors and bankers remain sanguine about Adani’s finances, a worsening squeeze on global tech funding may even work in the billionaire’s favour.

Whether India will ever be a market dominated by a couple of all-purpose mobile applications remains an open question. — Bloomberg

Andy Mukherjee is a Bloomberg Opinion columnist covering industrial companies and financial services in Asia. The views expressed here are the writer’s own. 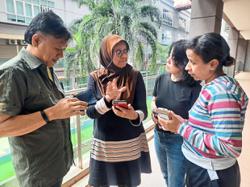