(Maybank), which saw its net profit jump 28.5% to RM2.16bil in the third quarter ended Sept 30 is focused on driving loans growth in key business segments across the bank’s home markets within a rising rate environment.

“The group will continue to drive fee-based income opportunities in growth areas such as wealth management, global markets, investment banking, asset management, and insurance,” the bank said in a filing with Bursa Malaysia.

The bank added that strategic investments would be channelled to enhance its digital offering and IT capabilities aligned to the priorities under Maybank’s M25+ corporate strategy with specific emphasis on customer centricity.

On sustainability, the group’s focus remains on driving greater financial inclusion, offering sustainable financing solutions as well as supporting the move towards a responsible transition to a low-carbon economy.

“In an uncertain economic environment, the group will maintain its liquidity and capital positions to support business growth and the needs of its stakeholders. It will also continue to proactively engage with customers targeted basis to extend additional support for those in need and as part of its robust asset quality management process,” it said.

The bank is maintaining its headline KPI of return on equity of between 9.5% and 10% for FY22, factoring the impact of the one-off Prosperity Tax announced by the federal government of Malaysia.

In a separate statement, group president & CEO Datuk Khairussaleh Ramli said the group will drive income growth across its loan portfolio and fee income streams as well as maintain discipline over its asset quality monitoring.

“While Asean economies are expected to continue their growth into next year albeit at a slower pace, we will keep our strong liquidity and capital positions to manage potential downside risks that could emerge in the operating environment.

“We will also accelerate improvements across our five strategic thrusts under M25+ including customer centricity, digitalisation, regionalisation, sustainability, and Islamic finance so that the organisation remains in the leadership position beyond 2025 and capable of delivering hyper-personalised customer service offerings that encompass the customer’s lifecycle journey,” he said.

The bank said higher net fund and fee-based income as well as a 25.2% year-on-year (Y-o-Y) reduction in net impairment losses boosted its profit before tax by 41.4% from a year earlier to RM3.21bil.

Its overhead costs expanded to RM3.39bil from RM2.82bil a year earlier on normalising of business activities, inflationary adjusted spend, and higher IT expenses.

The group’s cost-to-income ratio improved slightly to 45.8% from 45.9% a year earlier, as income growth outpaced cost growth for 3Q22.

Meanwhile, net impairment losses declined 25.2% to RM840mil from RM1.13bil a year earlier as higher proactive provisioning was made last year due to macroeconomic headwinds and potential borrower vulnerabilities owing to prolonged movement restrictions.

Its total group gross loans grew strongly by 8.2% Y-o-Y across both sectors of global banking (GB) and community financial services (CFS) as at Sept 30, lifted by increases of 13.1%, 7.9% and 4.0% in its home markets of Indonesia, Malaysia and Singapore respectively.

Meanwhile, the group’s gross deposits expanded 4.9% primarily led by growth in Malaysia of 8.7% and Indonesia of 5.0%.

Net interest margin (NIM) for the nine-month period to September 2022 expanded 8 bps to 2.39% from 2.31% on the rise of interest rates during the year.

Maybank maintained robust capital and liquidity positions as at 30 September 2022, with its CET1 capital ratio at 13.84%, and total capital ratio at 17.15%. Its liquidity coverage ratio stood at 144.2%, well above the regulatory requirement of 100%.

Notwithstanding this, Maybank continues to maintain its management overlay built since the pandemic began for anticipated weakness in the credit quality of borrowers, arising from new macroeconomic headwinds.

As at Oct 31, some 3.7% of the outstanding loan balance in Malaysia remains under relief programmes, while the portion in Singapore and Indonesia stood at 3.3% and 9.2% respectively.

Maybank said group CFS continued to strengthen its franchise in the first nine months of 2022, registering a 15.5% Y-o-Y increase in net operating income to RM12.04bil.

Total loans expanded by 7.8% contributed by the consumer and SME segments at 8.1% and 10.1% respectively.

Wealth management, a key focus segment for the group, maintained its upward trajectory with total financial assets rising 6.0% from a year earlier to reach RM413.7bil contributed by investments growth of 4.2% and loans growth of 10.6%.

For Malaysian operations, total loans expanded by 8.1% as the business banking and SME segment rose 8.2% while the consumer segment recorded an increase of 8.1%. Meanwhile, total CFS deposits

For corporate banking operations in Malaysia, total loans expanded 7.1% Y-o-Y to RM84.5bil on the back of a 19.3% and 4.3% rise in short-term revolving credit and term loans respectively. 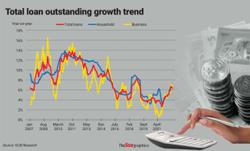 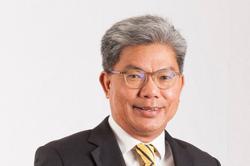