PETALING JAYA: Despite the threat of a recession in major economies next year, crude palm oil (CPO) prices are expected to remain supported in the quarters ahead backed by factors like market access of rival edible oils from the Russia-Ukraine war region, Indonesia’s export policies as well as issues like fertiliser availability, labour shortages, and weather uncertainty.

“The ongoing war has choked off food supply from Ukraine – the ‘world’s food basket’, including sunflower oil.

“The return of La Nina could spur risk of heavy rain and massive floods during the year-end monsoon season in South-East Asia including Malaysia. This will affect CPO supply due to disruptions in harvesting and crop evacuation,” Tek told StarBiz.

He added the chronic labour shortage in Malaysia with the snail-pace arrival of foreign guest workers, will exacerbate the situation.

CPO production is forecast to shrink for a third consecutive year.

The benchmark three months forward CPO futures contract on Bursa Derivative Malaysia closed at RM4,440 a tonne yesterday on buyer interest as the CPO remains at a substantial discount to soyoil in the market.

A futures representatives at a local futures brokerage said the rise in the CPO contract was likely due to traders covering short positions and if the edible oil market supply situation was to get tighter, CPO prices could go higher as traders cover positions further and take fresh bets.

He added fresh demand out of China has helped exports while stock levels remain elevated.

Last year’s performance translates to an fresh fruit bunch yield of 15.5 tonnes or 3.1 tonnes of CPO per ha, an all-time low since the 1990s.

“This is a shortfall of nearly one tonne oil per ha or equivalent to a loss of five million tonnes of CPO, considering we have a mature landbank of 5.15 million ha.

“Financially speaking, there was a huge revenue loss of nearly RM25bil for the Malaysian industry based on the average realised prices of CPO and palm kernel last year,” Chandran told StarBiz.

Therefore, he believes the most critical challenge confronting the local industry is about reversing the declining oil yield trends.

This year’s production performance, both in Malaysia and Indonesia, is likely to be short of original estimates.

The supply tightness has been factored-in by the market, resulting in a CPO price recovery to above the RM4,000 level recently, he added.

The current CPO price has attracted main buyers China and India. Soybean growers out of Brazil have also been holding back on soyoil sales in anticipation of strong prices which have helped widen the oil’s price spread over CPO.

Owner and co-founder of Singapore based Palm Oil Analytics Sathia Varqa expects the wide price spread to be temporary.

“The current spread is at a record high of about US$700 (RM3,324). The weakening ringgit against the US dollar also makes palm oil cheaper to international buyers stoking greater export interest,” he said.

He added higher global supply, especially due to exports from Indonesia and Malaysia, will bring the current elevated prices down in December as Malaysian’s CPO stock level hits a four-year high. Varqa expects the active month CPO futures to move below RM4,000 a tonne then. 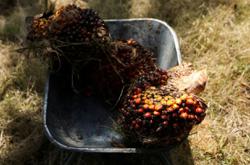