(MMHE) could be a signal of better things to come for the upstream segment of the oil and gas (O&G) industry.

MMHE won a contract for the engineering, procurement and construction work valued at about RM500mil from Sarawak Shell to build an offshore platform that is poised to be completed in 2025.

“We believe the contract award is a sign of not only the trust in MMHE’s capability and capacity to develop jackets for offshore platforms but also the strength of the group’s long-lasting collaboration with Sarawak Shell.

“The contract also signals the ramping up of the upstream sub-sector after being hampered by the pandemic and a nationwide economic slowdown,” MIDF Research said in its report on the company yesterday.

The project is being developed for the Rosmari-Marjoram sour gas field development project off the coast of Sarawak.

Despite this contract win, there are no changes to MMHE’s earnings forecast by MIDF Research since the project will not be completed until 2025 and the regional gas market continues to remain volatile for the moment.

“Our target price remains at 54 sen a share based on a price-to-earnings ratio (PER) of 10.5 times. The PER is based on the five-year average PER of dry-docking and marine sub-industry,” MIDF Research said while maintaining its “buy” call on MMHE.

“We reiterate our positive stance on the group for its strong order book backlog for current and future projects, as well as its long-term initiatives to incorporate sustainable solutions for its heavy construction build,” it added.

Meanwhile, TA Research remains positive about MMHE on this contract win, which represents its first major project win of the year.

“Inclusive of this new project, the group has secured RM522mil worth of contract wins. This new project falls within our 2022 order book replenishment assumptions of RM800mil for MMHE,” TA Research said.

It said inclusive of this new contract, it estimates MMHE’s current order book now amounts to RM1.8bil and offers earnings visibility for 1.5 years for the group’s heavy engineering segment. 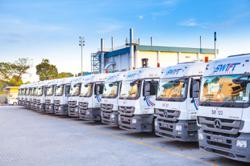