THE government has taken additional measures to mitigate the increase in food prices, given that it is the largest weighted category in the consumer price index and has an outsized impact on lower income groups.

According to the Economic Outlook 2023 report, the rising price of food is the main contributing factor to Malaysia’s higher inflation, from 2.2% in March 2022 to 4.7% in August 2022.

“The food inflation resulted from higher prices of agricultural inputs and supply chain disruption due to the ongoing Russia-Ukraine conflict.

“In addition, the food inflation is also caused by the strengthening of other basket of currencies, particularly the US dollar,” it said.

In response, the government implemented short-term measures to reduce the impact of food inflation including price controls, additional subsidies and cash assistance.

The report noted that the projected consumption subsidies, which include subsidies for RON95, diesel, LPG, cooking oil, flour, electricity, chicken and eggs, have increased from RM5.2bil allocated under Budget 2022 to reach RM52bil.

To rein in the price of chicken, from July 1, 2022, the government set a new ceiling price for chicken in Peninsular Malaysia at RM9.40 per kilo, and 45, 43 and 41 sen for eggs depending on their respective grades, which is expected to increase subsidy payments to poultry farmers by RM370mil in 2022.

Transport costs, which contribute to the inflationary price of goods and services, were also addressed as the government have retained the pump prices of RON95 and diesel since March 2021 via subsidies.

Accordingly, the government would have provided subsidies and social assistance of an estimated RM80bil in 2022, which would be the largest in Malaysia’s history, said the report.

But the Economic Outlook 2023 report also noted that increased subsidies came at an expense to allocations to the country’s productive capacity such as in developing public infrastructure, especially in the health and education sectors.

For longer-term sustainability, the report said the government was cognisant of undertaking reforms to strengthen food security.

“Efforts to increase productivity will be undertaken to ensure producers have the ability and competitiveness to produce their products in the local market while helping to stabilise supply to meet the higher future demand.

“In this regard, the government will support the agrofood business in enhancing its productivity through the adoption of Fourth Industrial Revolution technologies such as precision farming drones and smart algorithms,” it said.

It added that the government will continue to improve the food-related supply chain to promote food price stability.

Concurrently, it will mitigate the impact of global developments on the cost of living via enhanced upskilling and reskilling programmes to ensure a stable standard of living, especially for lower income groups. 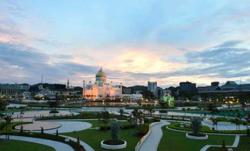