THERE is a growing chorus sounding global recession alarm bells.

The international institutions (International Monetary Fund and World Bank), reputable investment bankers on Wall Street and central banks around the globe are starting to warn about a sharp economic downturn in 2023.

Since the eruption of military conflicts in Ukraine in February, global growth prospects have seen a rapid deterioration as tempered by high and longer inflation and still high level of energy and commodity prices though these have eased off from the peak.

These headwinds, coupled with the accelerated interest rate hikes globally and tightening financing conditions, have ignited a debate about the possibility of a global recession in 2023.

Emerging economies’ currencies have slipped rapidly against the strong US dollar, along with higher US interest rates, and for longer would cause disruptive negative spillover effects on these economies: capital reversals due to the interest rate differential, increased debt burdens, higher cost of imports and consumer price pressures.

Bad vibes and the US Federal Reserve’s (Fed) aggressive monetary tightening suggest we may be heading into a recession.

The World Bank has warned that simultaneous global rate hikes in response to inflation could trigger a recession in 2023.

With the risk of a global recession, especially in the United States and Europe being worried about, is Malaysia safer than we were during the Covid-19 pandemic crisis in 2020-2021 and the Global Financial Crisis in 2008-2009?

The answer is Malaysia will be manageable but will not be fully insulated from an external economic shock if triggered by a global recession or a severe recession in the US economy and Europe.

Both the United States and Europe accounted for 19% share of Malaysia’s exports while that of China was 13.4% in January-July 2022.

While the Malaysian economy has recovered from the pandemic crisis to grow by 3.1% in 2021 and an estimated 6.5% in 2022, the underlying recovery strength is still not evenly among economic sectors.

Business costs, consumer price pressures, rising cost of living and the weakening of the ringgit against the US dollar will continue to persist until the Fed has done with its cycle of aggressive rate hikes, probably by the first half of 2023 (1H23).

Domestic labour market has not fully recovered as July’s unemployment rate of 3.7% is still a distance from the pre-pandemic jobless rate of 3.3%.

So how should policymakers prepare and respond to a highly anticipated global economic shock in 2023? Policymakers need to navigate a narrow path that requires a comprehensive set of demand-and-supply side measures.

First, the inescapable reality is that Malaysia’s fiscal space is limited: a narrow tax base and weak tax efforts. Federal Government debt at 62% of gross domestic product (GDP) at end-June 2022 is not too far from the debt ceiling of 65% of GDP.

Some of the “low-hanging fruit” subsidy reform can be undertaken to free up some fiscal resources for other purposes.

The fiscal support can be front-loaded on low-hanging fruit sectors (such as tourism, smaller scale socio-economic projects and community-based programmes), from which multiplier impact can be felt and implemented fast.

Allocations can also be made to the flood mitigation and relief as well as environmental and green projects.

Can the households brace for an economic slowdown?

The job market and wage growth will slow. The pent-up demand has fizzled out; rising inflation and high cost of living as well as higher interest rates mean people will lose their purchasing power and consumption will normalise or even slow markedly.

The rollout of consumption-boosting measures are limited now as a large number of Employees Provident Fund (EPF) contributors, especially in the low and middle-income group, have exhausted their retirement savings (currently, about 52% of EPF members have less than RM10,000 in their accounts, while 27% have less than RM1,000).

There is only the recurrent cash handouts, including e-wallet, to assist the low and middle-income households and individuals, but the amount of higher payout is now being constrained by bloated subsidies on fuel, food and others.

On businesses, policymakers need to put in place measures to ease the constraints that confront labour market, cost of doing business, regulatory as well as compliance cost, and trade networks.

As businesses are already facing increased operating costs (input, transportation and employment costs) as well as the impact of the weak ringgit on imported inputs, some form of cost relief measures are needed.

Banks have to work with weak business models and high level of non-performing loans to clean up their balance sheets. Green-related financing and grants will support small and medium enterprises.

Both domestic financial and foreign exchange markets would witness persistent volatility arising from the negative spillover effects of the global financial markets if a recession hit major advanced economies.

Our financial institutions must be strongly capitalised to withstand the impact of capital outflows and tighter liquidity conditions.

Flexible ringgit exchange rate can help absorb shocks although the weakening ringgit has a varying degree of impact on the different sectors.

Bank Negara will have the policy tools to ensure an orderly foreign exchange market and ensure sufficient domestic liquidity (both the ringgit and US dollar) to support the economy.

The monetary policy must be employed consistently to support domestic demand, in a timely manner, and to ensure price stability. 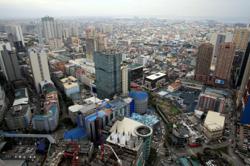