Slowing momentum: A cyclist rides across Cavenagh bridge near the financial business district of Raffles Place in Singapore. The country’s officials are bracing for further volatility in the global economy. — AFP

SINGAPORE: Singapore trimmed its 2022 growth forecast to reflect an increasingly challenging global environment, after the economy slipped into contraction in the second quarter.

Final data for the June quarter showed gross domestic product shrank 0.2% from the previous three months, and worse than the zero growth estimated by the Trade and Industry Ministry (MTI) earlier.

The MTI flagged risks to global recovery from aggressive monetary policy tightening as well as China’s ongoing struggles with Covid-19 and a property market downturn.

“Downside risks in the global economy remain significant,” Gabriel Lim, MTI’s permanent secretary, said in a briefing after the release.

The trade-reliant city-state has sought to stave off further damage to its post-Covid growth recovery, stemming especially from supply-driven price shocks, through a combination of monetary policy tightening and targeted subsidies to aid the most vulnerable households.

Singapore officials are bracing for further volatility in a global economy that the International Monetary Fund warned is on the brink of recession.

“The bigger question is what is the 2023 outlook,” said Selena Ling, head of Treasury Research & Strategy at Oversea-Chinese Banking Corp. “Will there be recession in the major economies that will drag the global and Asian growth prospects down further?”

The trade ministry data also showed the economy grew 4.4% in the second quarter from a year ago, compared with an earlier estimate of 4.8% expansion. The government expects “slight” quarter-on-quarter growth for the remainder of the year, ruling out a technical recession, according to MTI.

Monetary policy is still appropriate after the tightenings this year, Edward Robinson, deputy managing director for the Monetary Authority of Singapore, said at the briefing.

But “significant uncertainties” remain on the inflation outlook and third quarter will be a critical time to watch those pressures, he said. The closely-watched core inflation print is seen to “rise a bit” this quarter, Robinson said. — Bloomberg 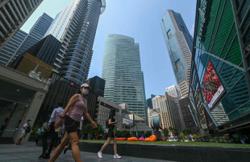