(CMSB) is confident its construction division will grow its order book by an average of 80% per year and sustain earnings momentum over the next two years.

CMSB reduced its stake in two subsidiaries – PPES Works (Sarawak) Sdn Bhd and CMS Resources Sdn Bhd – to 49% from 51% after disposing of 2% equity interest to the SEDC in 2020.

Following the deal, PPES Works’ construction and road maintenance activities and CMS Resources’ quarry operations as well as manufacturing and sales of concrete products and premix come under the direct control of SEDC.

CMSB, however, continues to manage the day-to-day operations of PPES and CMS Resources.

“Moving forward, the CMSB group is focused on strengthening its competitive edge by bidding for new projects related to mega infrastructure works in Sarawak.

“The group also expects other infrastructure projects, such as the upgrading and improvement works of urban roads, to take form in 2022,” said Sulaiman.

He said this in a circular to shareholders on the proposed disposal of the CMSB’s stake in OM Materials (Sarawak) Sdn Bhd (OM Sarawak), which owns a ferroalloy smelting plant at the Samalaju Industrial Park in Bintulu.

CMSB is seeking approval from its shareholders on the proposal disposal at an EGM here on Aug 26.

On the group’s construction materials and trading business, Sulaiman said given SEDC’s majority stake in the quarry and premix-related operations, CMSB is on a stronger footing to capture opportunities from the infrastructure development in Sarawak.

This is especially with several mega infrastructure projects underway or in the pipeline including the Pan Borneo Highway and the Autonomous Rapid Transit (ART) under the Kuching Urban Transportation System (KUTS).

SEDC is tasked by the Sarawak government to develop the KUTS via wholly-owned unit Sarawak Metro Sdn Bhd.

The civil and structure works of KUTS, estimated to cost about RM5bil, are expected to commence in the current quarter.

Passenger service for ART (Samarahan and Serian Lines covering a total distance of 53km, 27 stations, two interchange stations and two depots) is expected to be introduced in stages from the fourth quarter of 2025, with full completion scheduled for 2027.

“Today, the premix operation remains agile and all set to capitalise on the new opportunities presented by the development of several mega infrastructure projects.”

On the group’s cement manufacturing business, Sulaiman said CMSB will continue to improve its system and processes in line with its aim to become a highly resilient segment with strong core competences.

The group targets to strengthen and improve its clinker production with a medium-term goal of achieving 90% of the annual rated capacity to lower the state’s reliance on imported clinker, as well as reduce its operational costs and improve long-term profit margin.

CMSB’s clinker production capacity is about 900,000 tonnes per annum.

“As part of the group’s drive to decrease its carbon footprint, CMSB expects to increase the use of portland limestone cement 32.5N (PLC-32.5N) over the traditional CEM 1 portland cement, as PLC-32.5N uses less clinker, thus lowering its carbon footprint significantly,” he added.

CMSB is Sarawak’s sole cement manufacturer with grinding plants in Kuching and Bintulu with a combined rated capacity of 1.75 million tonnes per annum. The group also owns a clinker plant in Mambong.

The group intends to launch some 288 units of properties there with gross development value (GDV) of RM100mil this year.

This division also plans to develop another 80 three-bedroom apartment units with GDV of RM22.8mil within the township of Samalaju Industrial Park, with construction works set to commence in the current quarter and be completed in the second quarter of 2026. 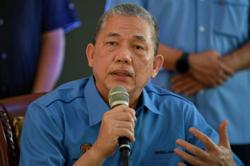