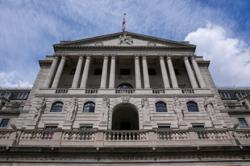 Tough times: A man walks pass a closed store in Reading. A research found that millions of low-income UK households are going without essentials, falling behind on bills and taking on debt. — Bloomberg

LONDON: The price of basic goods in UK stores is rising at the fastest pace in almost 14 years, leaving poorer families taking drastic action to make ends meet, according to surveys.

The British Retail Consortium (BRC) said shops are having to pass on some of the burden of soaring raw materials costs, leading to the biggest price increases since September 2008.

Fresh food drove the surge with a 6% jump in prices in the year through June.

Separate research by the Joseph Rowntree Foundation found that millions of low-income households are going without essentials, falling behind on bills and taking on debt.

A £15bil (US$18.3bil or RM80.52bil) support package announced by Chancellor Rishi Sunak last month “doesn’t even touch the sides when it comes to the financial problems of low-income families,” the poverty campaign group warned.

The two reports will increase pressure on Prime Minister Boris Johnson’s government to do more to ease the worst cost of living crisis in a generation.

The squeeze is threatening to push the economy into recession, with the pain set to get worse in October when energy bills are due to jump again.

The crisis has been exacerbated by the war in Ukraine, which has created shortages of key inputs such as fertiliser and animal feed.

Bank of England (BoE) governor Andrew Bailey last month warned that the surge in food prices could have “apocalyptic” consequences for the world’s poor.

“Retailers are working to find more ways to protect their customers from the worst effects of inflation but if costs continue to spiral, government may need to find ways to help retail businesses support their customers,” said Helen Dickinson, chief executive of the BRC.

Overall shop-price inflation accelerated to 3.1% in June, driven by a 5.6% increase in the price of food – the most since 2011 and triple the pace of non-food inflation. Fresh food such as cheese surged by 6.2%, a rate last seen in 2009.

The BRC survey tracks the price of commonly purchased items. The official consumer-price inflation rate, which covers a wider range of products and includes services, hit a 40-year high of 9.1% in May and is forecast by the BoE to top 11% come the autumn.

“Shoppers are now more likely to cut down on out of home consumption, shop to a fixed budget, switch to cheaper private label and seek out retailers where prices are the lowest,” said Mike Watkins, head of retailer and business insight at NielsenIQ, which produces the figures with the BRC.

The Joseph Rowntree Foundation painted a bleak picture of life for the bottom 40% of the income spectrum.

About seven million households, equivalent to every family in the north of England, missed out on essentials like heating, toiletries or showers, or didn’t have enough money for food last month.

“No one should be put in this precarious position,” said Katie Schmuecker, principal policy adviser at the Joseph Rowntree Foundation. “The hardship families are facing now builds on a decade of cuts and freezes to social security.

“The chancellor’s cost of living support package will offer some temporary relief but rather than lurching from emergency to emergency, government must get ahead of this problem.” — Bloomberg