The conglomerate recorded a net profit of RM43.10 million in the same quarter last year.

The group's revenue rose to RM3.44 billion, an increase of 65 per cent, from RM2.09 billion recorded last year, it said in a filing with Bursa Malaysia today.

"The overall positive results were mainly attributed to a one-off gain from the disposal of plantation land of RM364.1 million, as well as continued robust performance by almost all the divisions.

During the quarter, the plantation division registered a significantly higher profit before tax of RM509.5 million versus RM19.3 million previously amid the land disposal in Kulai, Johor last year.

Its trading, finance and investment division recorded a doubled profit before tax of RM122.1 million from RM47.3 million.

The higher profit was mainly driven by an improved stockholding gain as compared to the same period last year by Boustead Petroleum Marketing on the back of higher average fuel prices.

Meanwhile, its pharmaceutical division achieved a higher revenue of RM962.2 million versus RM793.5 million previously, mainly due to positive growth across the group's concession and Indonesian businesses as a result of strong demand from customers.

Group managing director Datuk Seri Mohammed Shazalli Ramly said as the nation moves towards a recovery period while still withstanding the challenges related to the prolonged COVID-19 pandemic, the group continues to remain cautious with the current uncertainty of the global market and political climate, especially with the ongoing Ukraine-Russia conflict.

"Nevertheless, we have placed provisional measures to safeguard the businesses while we continue to be optimistic of our prospects moving forward," he said.

"They (Al Hajri) seek to explore investment opportunities with Boustead which include businesses related to oil and gas, medical, construction, housing development and finance sectors, all of which fit perfectly with our Boustead Hijau Agenda,” he said. - Bernama 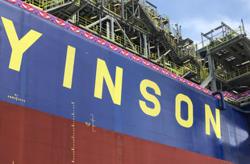