From the statistics, Apple Inc has shown its dominance across all fronts as the premium consumer technology company.

This is precisely why it became the most valuable company in the world and the first ever to cross the US$3 trillion (RM12.6 trillion) threshold. It is an extraordinary story of the American dream and innovation-spurred capitalism, especially when Apple was only 90 days from bankruptcy in 1997. 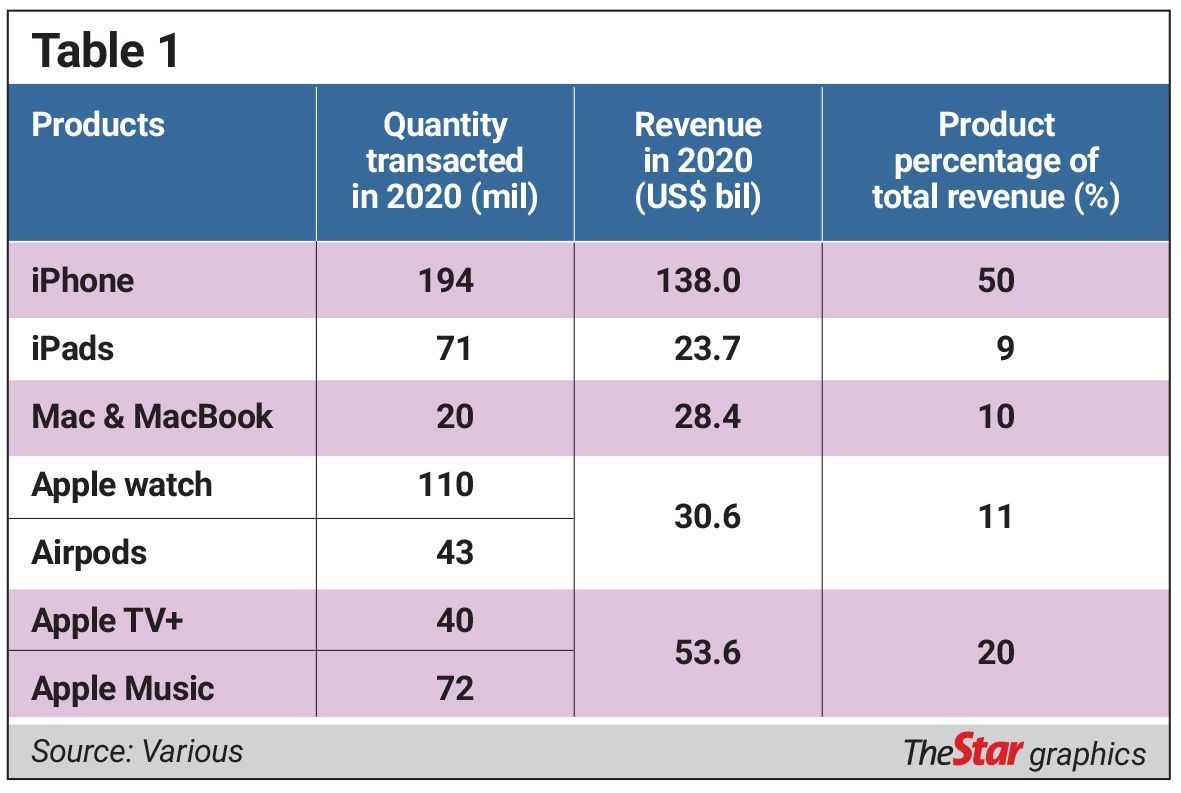 The irony was Apple being saved by its nemesis Microsoft Corp, when Bill Gates announced an investment of US$150mil (RM628.5mil) to bail it out.

While Apple is currently the most valuable company in the world, Microsoft is right behind with a market cap of US$2.5 trillion (RM10.5 trillion).

I can still vividly remember the long queue in London when the second-generation iPhone was launched during my university days. It was as though a legendary rock star was in town and the long queues outside the Apple retail store in Regent Street was too fanatical to be true.

As a passerby, I could not imagine how people would be so crazy over a headphone.

Many credit the cult following and loyalty towards the Apple brand to the larger-than-life personality of Steve Jobs and his one-of-a-kind marketing showmanship on stage during product launches.

While Jobs has passed on for a decade now, his legacy and tradition lives on with the people within the organisation.

Most MBA courses and business textbooks highlight the risk of a company which is synonymous with its charismatic founder, for fear of the potential risk of deterioration or worse, collapse in the event of the founder’s departure.

Hence, when the news of Jobs’ late-stage cancer surfaced, there was panic on the streets for investors and shareholders alike. Morale was low and the images of Jobs’ gaunt physique sent chills down the spines of those who had an interest in Apple.

Although the trusted COO, Tim Cook, and chief design officer Jonathan Ive had been a steady pair of hands with Apple for years and were ready to steer the ship, many were still anxious about the company’s future prospect.

Time has proven that the concerns were unfounded. At the time of Job’s death, the market cap of Apple stood at US$340bil (RM1.42 trillion).

Today, it is nine-fold more than what it was worth only a decade ago. This means if an investor had taken a RM100,000 position in Apple during the time of Job’s passing, today it would be worth RM900,000.

While some would say it is in part due to inflation and extremely loose monetary policies, the fact is the foundation laid by Jobs in his lifetime has provided the groundwork and blueprint for the successors and professional managers of the company.

There is no grander example of organisational success. This means that when the company or organisation can grow beyond a single pioneering individual or group of founders, the company is one built to last.

This is made possible because of how Apple has continued to disrupt and innovate in the technology space which affects our daily life, ranging from communications, time, entertainment, work and now towards transportation.

Warren Buffet who is a strong believer in fundamentals and value investing has always been averse to investing in technology company due to his lack of understanding in the space. As a result, he was not an early investor in Apple and definitely not a major shareholder in Apple. In fact, Berkshire Hathaway only first started taking position in Apple in 2016 and increased their position through to mid-2018. The premium paid on Apple’s shares for the 5% stake was close to a staggering US$ 36 billion (RM 151 billion). Similarly, this stake is now worth US$ 160 billion (RM 672 billion) as Apple’s share price make new highs. This is 4.5 times return in 4 years for Berkshire Hathaway which indicates a return of 88% per annum.

While many have said the mindset change for Buffet in embracing Apple, a stark departure from his usual self, was due to the role of his two lieutenants Todd Combs and Ted Weschler, Buffet have offered some indication of how he view his investment in Apple. Buffet has notably called Apple Berkshire’s “third-largest business,” after its insurance and railroad interests. He said the iPhone is a “sticky” product, keeping people within the company’s ecosystem. In 2020, he told CNBC that “Apple is probably the best business I know in the world. I don’t think of Apple as a stock. I think of it as our third business.”

Although Apple belongs to the technological sector and it is listed on NASDAQ, Buffet still holds dear to his fundamental investment philosophy to invest in good businesses. This pretty sums up the approach that investors should adopt when looking at investments. It is more than just a ticker or a stock, but the sum of its parts, which is ultimately comes down to it being a business.

What differentiates Apple from other consumer technology company is the ability of Apple to sell consumer electronic products and wearables at a premium pricing. This allows them to enjoy extremely lucrative profit margins which contributes directly to the balance sheet of the company and in turn reward shareholders. In addition, they have built a very simple, easy to use interface for their products with an ecosystem to keep consumers within the bubble. This helps grow and retain consumers for a long period of time.

I believe the Apple playbook is quite well publicized and if one works on emulating the best practices, there is a good probability that we will see more trillion dollar businesses in the years to come, not only from US, but other parts of the world.

Hann, is the author of Once Upon A Time In Bursa. He is a lawyer & former Chief Strategist of a Fortune 500 Corporation.