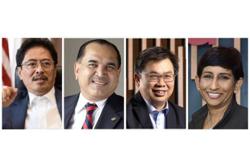 This year’s FAW brings together over 500 internal and industry participants to join the fight against fraud by engaging in various FAW programmes, including interactive games, quizzes and seminars, which are designed as part of a learning and educational programme on trends and practices surrounding fraud prevention and detection.

“The games bring together participants from various industries, not just the regulators or financial services,” said Jowell Beh from CTOS Digital Bhd’s the Fraud Fighters, with Tan Su Ling as his teammate.

Edutainment focus: It was a fun, exciting and educational event, said Tenbagger’s Ong (centre). He was joined by Khor, also from Kenaga Investors Group.

“Whether you are in IT, finance, human resource or operations, you can win the game too, if you put in effort to learn and understand the concepts and have fun doing it.”

It is a sentiment that Nur Sharizad Mohd Shahimi and Farzana Aida Zulrailan of the Game Junkies, the SC team that won as the first runner-up, agree with.

As Nur Sharizad noted, the games not only promoted a healthy element of competition, but was also an important educational tool that promoted knowledge on fraud awareness and prevention.

She said, “Even though the subject matters are things related to our line of work, we do find them beneficial, as we got to learn a lot of new things or refresh ourselves on some aspects.

“In spite of not being physically present at Kenanga Group’s headquarters to participate in the games as we have in the past, the games organised online were very well done and well prepared.”

Kenanga Investors Group’s team, Tenbagger’s Ong Soon Chong, summed it up best with: “It was a fun, exciting and also educational event.”

Tenbagger, which consisted of Ong and Marvin Khor Tze-Chao, was the second runner-up.

As Malaysian Association of Certified Fraud Examiners (MACFE) president Datuk Seri Akhbar Satar said during the Nov 15 virtual opening ceremony, “We must educate ourselves on issues relating to fraud and corruption, in addition to being vigilant in taking proactive and preventive steps to deter acts of fraud and corruption.

“Participating in FAW is one step taken towards being part of the solution as it raises awareness on fraud and corruption.

Cutting across industries: CTOS Digital team, Fraud Fighters’s Tan (right) and Beh, who said that the games brings together participants from various industries

The highlight of a month-long virtual fraud awareness campaign to unite various parties in the fight against fraud, bribery and corruption, this year’s FAW was themed ‘Reinforcing Ethical Values through Regulatory Dynamism’.

This fifth annual FAW by Kenanga Group also reflects the acceleration of the integration of environmental, social and governance (ESG) aspects into its operations.

“We are very pleased that we have managed to expand an internal campaign that we started five years ago, into this industry call-to-action to combat fraud and at the same time, respond to the United Nations Global Compact’s 10th Principle, which emphasises the need for businesses to work against corruption in all its forms.

“As we work to further incorporate ESG criteria throughout our value chain, we are committed to continue amplifying the importance of accountability, integrity and good governance and rally more people to join the fight against fraud,” said Datuk Chay Wai Leong, the group managing director of Kenanga Group.

This flagship campaign, which is rolled out annually in conjunction with the International FAW of the Texas-based ACFE, serves to complement the full suite of policies, frameworks and robust internal controls Kenanga Group has in place to embed good business conduct and high standards of integrity, operate ethically and transparently, as well as comply with applicable laws and regulations.

As such, the group is strongly looking forward to seeing new faces participating at the FAW event next year. 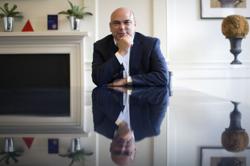 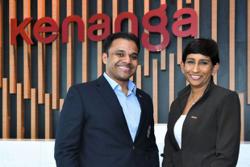