KUALA LUMPUR: Growing headwinds for Bursa Malaysia could dampen its future performance even as investors attempt to move past weak corporate earnings results in the third quarter.

Based on RHB Research data, the recently concluded third-quarter earnings results were mixed, with a greater number of missed estimates than beats. Of the stocks under its coverage, 29.8% came above estimates, 37.7% in line and 32.5% below. Similarly, a tally against consensus forecasts showed 27.2% exceeding expectations, 38.6% within and 34.2% disappointing.

According to RHB, the September quarter results were broadly in line with its expectations after having considered the impact of the longer-than-expected duration of Movement Control Order 3.0.

It said six sectors including auto, NBFI, construction, property, basic materials and consumer disappointed given the lower utilisation levels during the lockdown.

However, the plantations sector proved to be the highlight of the earnings season with estimate-beating performances given the higher crude palm oil price and realised average selling prices.

In addition, banks were also a positive surprise given its lower-than-expected credit costs.

Moving forward, RHB cautions that growing macroeconomic headwinds could further derail the prospect of a recovery while the implementation of the Cukai Makmur corporation tax will weigh on earnings growth.

"While the base case scenario is for the economic re-opening to positively evolve, we believe the recovery scenario has been largely priced in.

"Macroeconomic headwinds are building up – centred on global inflation and the US Federal Reserve’s (more hawkish) narrative on monetary policy and China’s economic growth trajectory," said RHB in a report.

It added that the resurgence of Covid-19 coupled with the emergence of the Omicron strain of the virus now poses as a wildcard for the market.

While RHB said there has been no detectable uptick in Covid-19 infections following the Melaka state polls, it noted that the Sarawak state elections will take place in three weeks.

Meanwhile, the research firm believes there remains elevated policy and regulatory risks given the lack of political will to implement the reform of public sector finances.

"The incremental corporation tax payable for Cukai Makmur in Budget 2022 will wipe out nominal FBM KLCI earnings growth for FY22 and raise market valuation by a 1x P/E," said RHB. 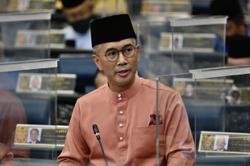