SYDNEY: Australia's planned reopening of state and international borders has led to a surge in flight searches and bookings, Virgin Australia and travel website Skyscanner said on Wednesday.

Virgin Australia said demand for domestic flights leapt by 125% in the past four weeks. Demand for flights to New Zealand were up by nearly 100% and for the Indonesian island of Bali by 217%, though quarantines remain in place in those destinations.

Skyscanner said international flight search volumes from Australia had jumped 128% in the month since the government said fully vaccinated citizens and permanent residents would be able to leave the country without special permission from November.

Travellers returning to Sydney, Melbourne and Canberra will also no longer need to quarantine from Nov. 1.

Singapore said on Tuesday it would allow quarantine-free entry to travellers vaccinated against COVID-19 from Australia from Nov. 8.

"We've seen a steady increase in searches to Singapore as travellers were hoping for this latest exciting news," Whiteway said.

Virgin Australia said it planned to resume international services for the first time since the pandemic began with flights to Fiji on Dec. 16 as quarantine rules relax.

It will also renew frequent flyer partnerships with several international airlines that had been paused during the pandemic, when it went through a Chapter 11-like restructuring process and was bought by U.S. private equity group Bain Capital.

Singapore Airlines Ltd and Cathay Pacific Airways Ltd have opened seats for sale on flights to Sydney and Melbourne that had been used for cargo only or carried a small number of passengers due to previous caps. - Reuters 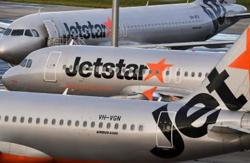