HONG KONG: Asian shares held recent gains on Monday ahead of a week packed with major quarterly earnings announcements, while news of trials of a property tax in China and ongoing troubles in the sector weighed on markets in Hong Kong and mainland China.

MSCI's broadest index of Asia-Pacific shares outside Japan was little changed - 0.07% higher - and still up 3.8% so far in October, while Japan's Nikkei lost 0.7% on softer earnings by several local companies.

Futures pointed to a solid open in European markets with the pan-region Euro Stoxx 50 futures up 0.24% in early trade and FTSE futures 0.26% higher.

In Asia, the regional benchmark was dragged down by muted performances in Chinese markets with property firms weighing heavily.

Chinese blue chips inched down 0.12%, and an real estate index shed 3%, while the Hong Kong benchmark traded flat despite a 3.4% fall in an index of Hong Kong listed mainland property firms.

The property stock declines followed a Saturday announcement by China's parliament's top decision-making body that will roll out a pilot real estate tax in some regions.

"Although we had some news on the Evergrande front, I think we will see more pressure on the property sector, especially the smaller guys," said Carlos Casanova Asia senior economist at UBP pointing to authorities’ efforts to ensure a correction in house prices, and the expansion of plans for a pilot property tax at a time when many property companies had bonds maturing in the coming months.

Also on investors' minds is a string of company earnings due this week.

Hong Kong listed shares of HSBC, pared earlier gains to be last up 0.1% even after Europe's second largest bank by assets reported a surprise 74% rise in third quarter profit.

Facebook will publish its quarterly results later on Monday, with other benchmark heavyweights due later in the week including tech giants Microsoft, Apple and Alphabet, and European and Asian financial behemoths from Deutsche Bank and Lloyds to China Construction Bank and Nomura.

The risk friendlier mood that supported equities has weighed on safe-haven currencies, as have rising energy prices which supported currencies including the Aussie and Canadian dollars.

Traders are waiting for U.S. third quarter GDP figures due Thursday with a weak print likely to weigh on the dollar, according to analysts at CBA, while expectations that rising inflation will drive interest rate hikes in the U.K and Australia have been supporting sterling and the Aussie dollar.

Markets are still trying to position themselves for a widely expected tapering of the U.S. stimulus programme this year, and the possibility of rate hikes late in 2022

Federal Reserve Chair Jerome Powell on Friday said the U.S. central bank should start the process of reducing its support of the economy by cutting back on its asset purchases, but should not yet touch interest rates.

Spot gold rose 0.36% to $1,798 an ounce after posting gains for the past two weeks on rising inflation concerns, ad the weakening dollar. 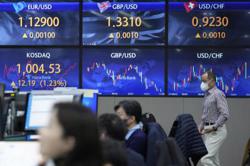