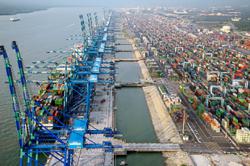 Steady: The entrance to the Bank Indonesia headquarters in Jakarta. The bank is expected to keep its main policy rates unchanged until the third quarter of 2022. ― Bloomberg

WITH a light week of economic data ahead, the markets will focus on the September consumer price index (CPI) due on Friday.

The Statistics Department will also be releasing the leading index for August 2021 on Friday.

The inflation rate is expected to be 2.3% by the end of this quarter, according to Trading Economics global macro models and analysts’ expectations.

The CPI for the period of January to August 2021 increased 2.3% as compared to the same period last year.

Meanwhile, Bursa Malaysia and its subsidiaries will be closed tomorrow in conjunction with Prophet Muhammad’s Birthday.

IHS Markit said following a brief spike in Covid-19 cases in Q3, which brought along mobility restrictions in certain regions, growth is expected to have slowed, though recent survey data already point to the worst of this latest slowdown having passed.

It noted that there was significant uncertainty and downside risks posed by the current electricity shortages/power rationing, funding stresses faced by some Chinese property developers domestically, as well as logistics disruptions/bottlenecks globally.

UOB also expects China’s loan prime rate or LPR due this week to be kept steady with the one-year rate at 3.85% and five-year rate at 4.65%.

BANK Indonesia’s (BI) meeting this week will likely be a non-event as most economists expect the central bank to maintain its rates.

According to a Reuters poll, BI is expected to keep its main policy rates unchanged until the third quarter of 2022.

All 29 economists expect the rate to remain steady at the conclusion of BI’s Oct 18-19 policy meeting.

BI left its benchmark rate unchanged at a record low of 3.50% at its September 2021 monetary policy meeting.

The central bank had signalled earlier that it could remain on hold at least until the year-end.

THE October flash purchasing managers’ index (PMI) due this week includes the United States, the United Kingdom and eurozone, along with Australia and Japan.

It noted that manufacturers worldwide experienced near-record delays and increased price pressures in September, though there were some signs of production constraints easing in Asia.

The October data will therefore be scrutinised for updates on whether the situation had further worsened.