The integrated electronics manufacturing services provider saw its net profit jump more than two-fold to a record-high of RM245.34mil in the financial year ended July 31, 2021 (FY21) from RM116.48mil in FY20. (Fil pic shows VS Industry plant in Senai.)

is expected to sustain its strong growth momentum driven by healthy orders from key customers.

The integrated electronics manufacturing services provider saw its net profit jump more than two-fold to a record-high of RM245.34mil in the financial year ended July 31, 2021 (FY21) from RM116.48mil in FY20.

The results came in higher than the expectations of analysts, most of whom remained optimistic of the prospects of VS Industry.

According to RHB Research, the company’s near-term earnings should pick up, following the resumption of a full workforce capacity, while longer-term earnings growth prospects are exciting, propelled by contributions from new production lines.

“The favourable shift in growth dynamics and a more balanced earnings profile have led to us believing that the share price rally still has legs, and a higher valuation is warranted,” the brokerage said in its report.

RHB Research maintained a “buy” call on VS Industry, and raised its target price for the counter to RM2.01 from RM1.65 previously.

“More than 90% of VS Industry’s workers have been fully vaccinated and it should be able to resume full workforce capacity by October. This will come in handy for VS Industry to commence more new production lines, and take on the seasonal demand that kicks in towards the year-end,” RHB Research said.

“We forecast a 39% earnings growth in FY22, indicating another record year after a stellar FY21, supported by the ramp-up in new production lines progressively from the two new customers secured earlier in 2020,” it added.

Public Invest Research said it had lifted its FY22/FY23 net profit forecasts for VS Industry by 3.9% and 7%, respectively, in anticipation of earlier-than-expected line commissioning for some of the company’s new customers.

The brokerage affirmed an “outperform” call on VS Industry, with a higher target price of RM1.86, compared with RM1.56 previously.

The new target price was based on a 20 times multiple to a rolled-over FY23 earnings, citing the longer-term horizon was appropriate, given the group’s multi-year growth trajectory.

Conversely, UOB Kay Hian Research (UOBKH) lowered its sum-of-parts target price for VS Industry to RM1.86 from RM1.90 previously, while maintaining its “buy” call on the counter.The revised target price was based on 20 times FY22 price-earnings (PE), which is at its three-year average mean PE.

This is after the brokerage assumed full warrants conversion, which resulted in an enlarged share base, alongside cash per share from the warrants conversion. It noted VS Industry is back to its high-growth cycle again, offering a two-year net profit compounded annual growth rate of 26% (from FY21 to FY23) even from its peak year in FY21.“VSI offers a better investment proposition compared to its peers, due to its exposure to strategic customers as well as it being the clear winner of the trade diversion,” UOBKH said. This is proven by its latest sizeable order wins from its new customers,” UOBKH said.

“We see the strategic move of embarking on a diversification strategy to broaden its customer profile as a plus point.”

The research house added that the current valuation has been overly conservative in assuming negative equity for its China operations, while ignoring its valuable assets. 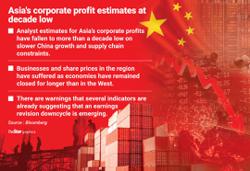