Slower pace: A FedEx driver delivers a cart of packages in New York. The company’s profit margins have come under pressure as commercial services have declined. ― AP

The company said a tight labour market was a key drag on fiscal first-quarter profit, as a dearth of workers drove up wages, reduced network efficiencies and increased the need to hire outside transportation services.

Executives estimate this resulted in US$450mil (RM1.88bil) in added costs from a year earlier.

Unadjusted operating margin was 6.4%, down from 8.2% a year earlier.

“The current labour environment is driving inefficiencies in the operation of our networks and significantly impacting our financial results,” said Raj Subramaniam, FedEx’s president and chief operating officer.

That prompted FedEx to slash its full-year outlook for adjusted per-share earnings to a range of US$19.75 (RM82.68) to US$21 (RM87.92), which excludes expenses from the integration of TNT Express and variations in the pension fund value.

The cost headwinds, which totalled US$800mil (RM3.3bil) including capacity expansions during the latest quarter, will continue into the second quarter.

“For the peak season ahead, service remains our focus and we are making investments in resources and capacity to meet our customer’s needs,” Subramaniam said.

FedEx expects package volume to rise during the holiday rush even after it notched record deliveries during last year’s peak season, said Brie Carere, chief marketing officer, on a conference call with analysts.

FedEx is predicting the industry will see 101 million daily e-commerce packages in the US by calendar year 2022, down from a June forecast of 107 million per day, as shoppers return to stores and consumers spend more on services.

“Despite this moderate change in e-commerce growth, the secular trend of e-commerce growing as a percentage of retail will continue to drive healthy parcel market growth,” Carere said.

The parcel market is expected to expand 10% annually through 2026, she said. FedEx during the quarter had to constrain volumes to keep service levels from declining. Average daily package volume in the first quarter unexpectedly fell slightly from a year earlier at both the Express and Ground units as “continued supply-chain disruptions have slowed US domestic parcel demand compared to the company’s earlier forecast.”

The company said it couldn’t hire enough workers to keep up with demand, a dynamic that pushed up wages for some hub workers by more than 25% from a year earlier.

“The labour availability challenges are likely to continue to pressure profitability over the next several quarter as the Covid-19 pandemic continues to impact the labour market,” said Matt Arnold, an analyst with Edward Jones, in a note to clients.

FedEx’s profit margins have come under pressure as residential deliveries driven by online shopping have grown faster than commercial service.

The latter has higher yields because more packages are left at one location and less driving is required between stops. 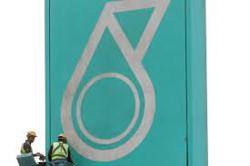