Benchmark prices in Asia are at a 13-year high and within striking distance of a record. File pic shows coal being unloaded at Tanjung Bruas, Malaysia.)

NEW YORK: Prices for coal are surging around the world as a shortage of natural gas spurs demand for the dirtiest fossil fuel to generate electricity.

Benchmark prices in Asia are at a 13-year high and within striking distance of a record.

Stockpiles are plunging ahead of a northern hemisphere winter that forecasters predict could be unusually cold, indicating the crunch is unlikely to ease anytime soon. Increased costs for electricity providers threaten to put further pressure on inflation that’s already running at the fastest in years.

And of course it’s a disaster for the effort to curb global warming as officials from around the world prepare for the United Nations General Assembly this week and climate talks known as COP26 set for November.

The only limiting factor is that the fuel’s grim long-term prospects have deterred suppliers from developing new mines, constraining their ability to expand production. That may put a ceiling on increases in consumption, but will only drive prices higher.

“When you have demand surging and you don’t have supply responding, this is what happens,” said Andrew Cosgrove, mining analyst with Bloomberg Intelligence.

Newcastle thermal coal, Asia’s benchmark, has more than doubled this year to about US$180 (RM755) a tonne, and Goldman Sachs Group Inc expects it will average US$190 (RM797) from October to December.

Tight gas supplies are the underlying trigger for coal’s rapid gains. Gas stockpiles in Europe were already smaller than usual this year after a cold winter, and supplies have been short in recent months after Russia limited deliveries so it could boost its own inventories. Gas output from Norway was also low because of maintenance.

In Asia, demand for liquefied natural gas (LNG) imports have been buoyed by surging industrial activity, especially in China.

Meanwhile, a drought in South America has cut output from hydropower plants, prompting a shift to thermal plants that use gas or coal. Particularly hot weather in Kuwait drove up the need for LNG there. All of this has elevated prices and buoyed demand for coal.

In the United States, utilities are expected to burn 23% more coal this year than in 2020 to offset rising gas prices, according to the Energy Information Administration.

Usage could spike even higher if long-term models showing signs that winter in the northern hemisphere could start early and deliver intense blasts prove accurate.

“If we have a really cold winter, we’re just putting more upward strain on everything,” said Dale Hazelton, head of thermal coal at the energy researcher Wood Mackenzie.

Coal producers have been struggling to meet increased demand. Some mines were closed because of the pandemic. Heavy rains in Indonesia curtailed supply from the world’s biggest exporter of power-plant coal. State-run Coal India is rationing the fuel as demand from utilities competes with industry.

On top of all that, the larger issue is that global mining capacity has barely budged in recent years. International sentiment against coal is strong because of its role in climate change, and mining companies are aware that the inexorable long-term trend is going against coal.

“In the past, when price has got this high, you would see announcements left, right and centre for new coal mines,” Hazelton said. ―Bloomberg 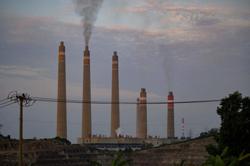