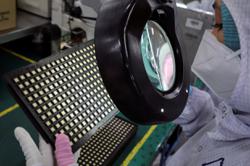 TA Securities Research, which remains bullish on the sector, said the demand for chips will continue to grow amid the Covid-19 pandemic and the proliferation of emerging technologies like 5G, artificial intelligence, cloud computing, Internet of Things and robotics.

The view from the research house comes as global semiconductor sales mark 18 consecutive months of year-on-year (y-o-y) growth as of July 2021.

According to the Semiconductor Industry Association, sustained robust growth in July was underpinned by all major regional markets and semiconductor product categories as production and shipments reached new highs in recent months to cater to continued strong demand.

In a note issued yesterday, TA Securities Research pointed out that 2021 global semiconductor sales are well on track to climb towards the World Semiconductor Trade Statistics’s forecast to reach a record high of US$527.2bil (RM2.19 trillion). “We continue to favour outsourced assembly and test providers, namely Inari, Unisem and MPI, for their strong sales pipeline and earnings growth prospects backed by their expansion plans.

“As for automated test equipment (ATE) provider Elsoft, we like the group for its improving order book, driven by the growing acceptance of its newer series of ATEs, particularly its flagship testers for lighting in smart devices and automotive,” it said.

Despite the positive outlook for the semiconductor sector, TA Securities said a prolonged Covid-19 pandemic weighing on economic growth and sentiment would be a key downside risk for growth.

Other downside risks for the sector would include a heightened trade war, weaker-than-expected sales and a weakening of the US dollar against the ringgit.

Looking ahead, TA Securities said the robust billings growth of the global semiconductor sector as of July underlines the industry’s endeavours to address the prevailing global chip shortage sparked by the acceleration in digitalisation. In July 2021, the global semiconductor sector’s billings hit another record high for the seventh consecutive month.

At the current rate, TA Securities said the billings are on course to reach a new record in 2021.

“Meanwhile, equipment spending is expected to remain strong in the coming years, fuelled by the slew of upcoming fabrication capacity to cater to the strong demand for chips anticipated from emerging applications like 5G to 6G communications, artificial intelligence, autonomous vehicles and high performance computing.

“This is in addition to efforts by major economies like China to pursue chip self sufficiency,” it added.