said its revenue soared 82% to RM1.18bil in the second quarter boosted by sales of Sinovac Covid-19 vaccine to the government.

Net profit rose 37% to RM13.7mil in the three-month ended June 30, the company said in a filing with Bursa Malaysia today. Pharmaniaga has declared a second interim dividend of 1.5 sen a share.

The company has supplied 12.4 million doses of the vaccine to the government, with the last batch shipped out on July 21. Last week, Pharmaniaga announced it has secured an additional order from the government for another six million doses.

"The Group has submitted approval for the vaccine to be used for the adolescent population in Malaysia to NPRA and upon approval, it will create a demand for 6 million doses," it said.

Recently, Sinovac vaccine was approved for the adolescent population, aged 12-17 years in Indonesia and China.

In addition, six countries are currently evaluating the use of Sinovac for adolescents, due to the increasing Covid-19 infectivity rate among children.

Meanwhile, a new study in China suggested that a third shot of the Sinovac vaccine administered six months or more after the second dose will boost immunity against the deadly virus.

"The Group expects Sinovac to offer booster shots soon, particularly for vulnerable and high-risk groups of the population in order to maintain protection against the virus, particularly from new variants," Pharmaniaga said.

The group also revealed that it was in discussions with Sinovac Biotech Ltd to facilitate the export of the vaccine to countries that face challenges in securing sufficient supply, including Indonesia, The Philippines, Cambodia, Thailand, as well as several African nations.

"Pharmaniaga’s forward planning has allowed the Group to capitalise on these apt opportunities," it said. 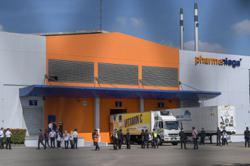