SINGAPORE: The Marina Bay Sands casino in Singapore will shut for two weeks after authorities detected a Covid cluster, the latest to emerge after an outbreak at a fishery port that made the government reimpose social restrictions.

Eleven Covid cases have been linked to the casino owned by Las Vegas Sands Corp, prompting the decision to close until August 5 for deep cleaning to break the spread of the virus, the Health Ministry said in statement on Thursday. Testing will be done on all staff working at the casino, which is part of a larger complex including a hotel, dining and luxury shopping mall.

Las Vegas Sands Corp. fell in late trading after reporting second-quarter results that trailed Wall Street estimates. The company has faced headwinds from pandemic-related travel restrictions that remain in place in its two key markets of Macau and Singapore.

The Marina Bay Sands casino cluster is a fraction of the 179 new coronavirus cases found on Wednesday. Most of those cases that day came from a fishery port cluster which appears to be the epicenter of a resurgence in infections found in food markets, karaoke clubs and now one of two casinos in Singapore.

"Unfortunately, while our fishmongers and stall assistants were going about earning an honest living, they got infected at the Port,” Ong said in a Facebook post in reference to the restrictions. "As they went on to work at various markets around the island, many more cases in the community were seeded.”

Government data shows the cluster at the fishery port and a food market has swelled to 454 cases, while the infections at the karaoke clubs rose to 215, making these the two main hotspots in Singapore.

About half of Singapore’s population has received two doses of vaccine, Ong said, adding he expects the number to rise by a percentage point daily to about 64% or more in two week’s time. "That will put us in a much stronger and resilient position when we review” the restrictions, he said. - Bloomberg 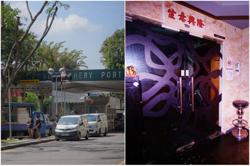