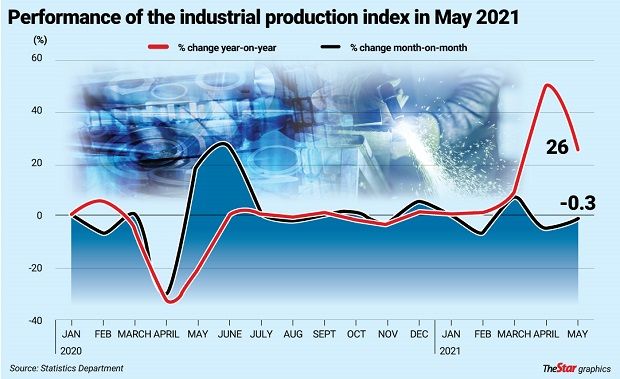 PETALING JAYA: Uncertainties surrounding the duration of the first phase of the National Recovery Plan (NRP) are expected to weigh on Malaysia’s economic growth, especially in the third quarter of this year.

While seven states have since moved on to the second phase of the NRP, which allows for an expanded list of activities, the situation remains bleak as most parts in Selangor and several areas in Kuala Lumpur are still under the enhanced movement control order (EMCO), one of the strictest restrictions implemented.

Figures of new Covid-19 cases remain persistently high for both states and at this juncture, it seems that chances are slim for any loosening of restrictions in the immediate future.

The two states contribute some 40% of the national gross domestic product (GDP) annually.

MIDF Research economist Abdul Mui’zz Morhalim told StarBiz that the main concern now is the extended lockdown, which suggests that growth will continue to weaken in the middle of the year, hence dragging down the full-year growth outlook.

“We are also concerned that the EMCO imposed in Selangor will affect production in July as more factories in the affected areas were told to halt their operations.

“Based on findings in the purchasing managers’ index (PMI) survey, the supply chain challenges are expected to limit the industrial production index (IPI) growth this year.

“On a positive note, the decision to place several other states under phase two of the NRP will allow more businesses in these states to reopen and resume their operations, ” he said.

Malaysia’s manufacturing PMI declined to 39.9 last month from 51.3 in May, indicating that manufacturing activities continued to slow in June.

According to figures released by the Statistics Department yesterday, Malaysia’s IPI for May surged 26% year-on-year (y-o-y), underpinned by expansion in the manufacturing index by 29.8%, the mining index by 20.7% and the electricity index by 7.9%.

The department also published the May manufacturing statistics yesterday, which showed a 37.2% y-o-y growth in sales to RM122.7bil, but this was a decline of 6.1% m-o-m. 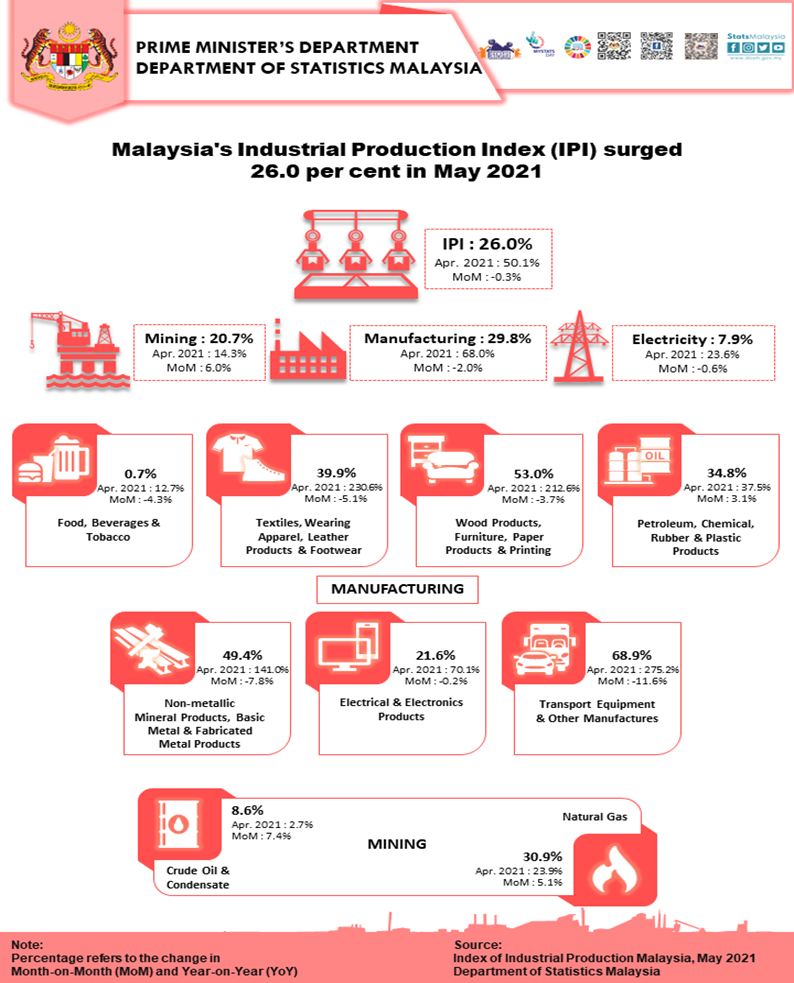 Bank Islam Malaysia Bhd chief economist Mohd Afzanizam Abdul Rashid said the latest IPI suggested that the manufacturing sector has been affected by the implementation of the movement control order (MCO) and its y-o-y expansion has been moderating.

Similarly, sales in the manufacturing sector moderated to 37.2% from 72.5% in the preceding month, he said.

“In a nutshell, economic activities would be much slower as the MCO period becomes protracted.

“To a large degree, it is not as surprising as what we have experienced in the past, especially during the first round of MCO last year, ” he said.

“We expect IPI growth to moderate further in the second half due to the extended lockdown and the fading base effect.

“We expect production and spending activities to recover when restrictions on the economy are lifted in the later part of the year, ” he said.

RHB Research also expected that industrial production will weaken in June, which will likely continue into July amid the ongoing restrictions.

As a result, it said weaker production is likely to seep into the early part of the third quarter.

“The assumption of post-June rebound is no longer the case. In July, the increasing number of localities under EMCO is likely to dampen production, moving forward.

“More importantly, the timeline for transition towards the ease of restrictions under phase two in Selangor and Kuala Lumpur seems to be delayed amid a high number of new infections, ” the research house said in a report.

It added that there seems to be no clear indication that the situation will ease anytime soon as the number of new cases remain stubbornly high.

While the manufacturing and wholesale sectors are moderately upbeat for the quarter, the construction, services and transportation sectors remained downbeat.

D&B Malaysia chief executive officer Audrey Chia said the slight deterioration in sentiments were largely due to the resurgence in Covid-19 infections and tightening of measures in the recent months.

“As certain economic sectors such as construction, consumer-facing services and transportation have been adversely affected, the dampened outlook is likely to be prolonged than anticipated.

“Moving into the third quarter, we expect the outlook to be uneven across sectors as the reopening of the economy is likely to be gradual and cautious in the coming months, ” she said.