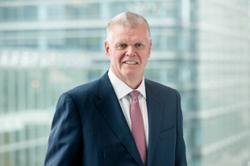 CEO Quinn said the bank was watching closely developments in India, which has seen an upsurge in infections. “We have to see how the pandemic develops in India, and we are watching very closely, ” said Quinn.

LONDON: HSBC Holdings Plc posted its best quarter since the pandemic began as an improving economic outlook drove optimism about the ability of borrowers to repay loans and its strategic reset to Asia remained on track.

First-quarter profit more than doubled as US$400mil (RM1.64bil) of loan loss reserves were released, spurred by the rollout of vaccination programmes in markets like the UK. Europe’s largest bank said its increasing focus on servicing wealthy Asians had also got off to a strong start.

Adjusted pre-tax profits of US$6.4bil for the three months to the end of March comfortably beat analysts’ forecasts.

The firm’s investment bank joined rivals in benefiting from active markets, as a 55% surge in equity trading helped lift the division’s revenue.

“The economic outlook has improved, although uncertainties remain, ” chief executive officer Noel Quinn said in a statement. “We carry good momentum into the second quarter.”

Easing credit losses helped it turn around its UK business and it also posted a profit in the US even as it embarks on shifting billions of dollars to Asia.

Weighed down by low interest rates, HSBC is seeking out more fee-based income, targeting to become a leader in wealth management in an increasingly affluent Asia.

Asia continued to be its biggest profit centre but earnings there were relatively unchanged from a year earlier. It saw big jumps in profit at all of its major divisions.

The bank has unveiled one of the most radical responses to the pandemic that emerged early last year, with plans to cut its workforce by about 35,000 to drive down costs. Even so, expenses rose in the period, driven higher by restructuring charges and performance-related pay.

With the virus starting to be contained in major markets, HSBC was boosted by the reversal in credit losses. In 2021, such losses are now seen below the medium-term range of 30 basis points to 40 basis points of average loans it indicated at its latest annual results, the lender said.

However, CEO Quinn said the bank was watching closely developments in India, which has seen an upsurge in infections. “We have to see how the pandemic develops in India, and we are watching very closely, ” said Quinn.

The bank said that it’s continuing negotiations on a potential sale of its retail operations in France. In the US, it’s exploring “both organic and inorganic options for our retail banking franchise, ” according to the bank.

While attention has focused on the businesses HSBC is attempting to sell, chief financial officer Ewen Stevenson said the bank was actively looking at possible acquisitions, mainly focused on its Asian wealth business, which is at the heart of its strategic repositioning.

Asked about Citigroup Inc’s sales of parts of its Asian business, Stevenson said “very few of them” would be a good fit for HSBC. “We are looking at other options in the region, predominantly in the wealth space, ” Stevenson said in a Bloomberg Television interview.

As part of its pivot to Asia, HSBC confirmed this month that three of its top executives would relocate to Hong Kong, meaning that most of the bank will be run from the region on a day-to-day basis. — Bloomberg 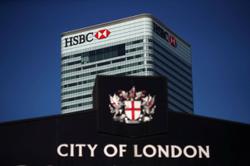 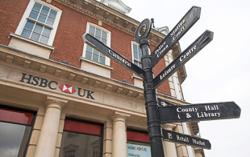