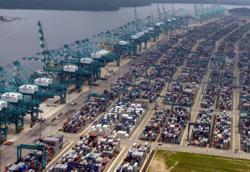 PETALING JAYA: The transportation and logistics sector will be one of the first to recover when borders are reopened and global economic recovery starts to gather steam but not all companies within the industry will benefit at the same pace.

Seaport operators are one of those which would gain the most but not before they face some immediate near-term challenges. Chief among the issues will be port congestion, according to analysts.

The Shanghai Containerised Freight Index (SCFI) has resumed its uptrend in recent weeks, after coming off throughout March from its recent peaks registered in January and February, said AmInvestment Bank.

could be one of those experiencing this.

“Being a transhipment port operator, Westport is not spared the loss of operational efficiency from the congestion, ” it told clients in a report. However, it noted that the company is likely to more prepared this time around due to the experience gained during a similar situation at the height of the Covid-19 pandemic last year.

“At that time, Westports created additional yard space and imposed stricter storage charges to help ease the situation at the port, ” it said noting that priority berthing was given to ships with more containers to be loaded than discharged to reduce the number of containers in the storage yard.

“We cut our FY21 net profit forecast by 2% as we now assume its throughput to grow at 2% versus 3% previously, ” AmInvestment said, but maintained its “buy” call on the stock.

In the same report, AmInvestment said it was more positive about MMC Corp Bhd

“The transhipment seaports under MMC Corp’s stable, i.e. Port of Tanjung Pelepas (PTP) and Northport, that are largely secondary in the geographical area they serve and hence less congested, stand to gain from the diversion of port calls by shipping lines from busier primary ports amid prolonged congestion, resulting in increase volumes and market share gains, ” it pointed out.

Citing past data, AmInvestment said during the pandemic-induced congestion in 2020, PTP registered a record container volume of 9.85 million twenty-foot equivalent units or TEUs (+8% year-on-year) while Northport recorded its highest ever monthly volume in December 2020.

This was when Westports could hardly cope with the traffic, it added.

The research house expected the port sector in the region to remain well-positioned to benefit from the “shifting sourcing patterns” accelerated by the pandemic.

This, it said, would arise from the relocation of manufacturing bases by multinational companies out of China into the region. Quoting data from Japan Maritime Centre, it said the share of US container imports originating in Asean broke through 20% for the first time in 2020 as volumes grew by 16.1% while China’s share declined for the second successive year.

“We advocate investors to stay invested in the seaport segment via Westports and MMC Corp.”