THE shampoo you use to wash your hair, the toothpaste you use every morning and the bread you had for breakfast all share a similar ingredient – palm oil.

Like it or not, the product of what used to be an ornament tree in Malaysia in the 1870s is now part of everyone’s everyday lives, being in almost 50% of packaged products due to its versatile nature.

Being one of the world’s largest palm oil exporters, Malaysia’s undisputable strength in palm oil comes in the form of a strong upstream presence.

Out of 47 listed companies in the palm oil business, 26 are pure upstream players, 19 have both upstream and downstream operations while two are purely downstream. Labour issue: Worker shortage in oil palm plantations in Malaysia is believed to have ballooned to about 50,000, resulting in a loss of around 25% in palm oil yield. — Bloomberg

China and India were Malaysia’s top export destinations last year at 2.73 million tonnes each but in terms of change, this was a 9.64% year-on-year (y-o-y) increase and a 38.16% y-o-y decline to India.

This time around, palm oil is hoarding all the limelight once again because the prices of crude palm oil (CPO) have sprung up to levels not seen since 2008.

The benchmark CPO futures contract on Bursa Derivatives was traded at around RM3,900 a tonne yesterday. It hit its peak on March 15 at RM4,138 per tonne.

Two factors come into play here, one of which is of course the shortfall in production that has led to supply disruptions as demand outstrips supply and secondly, the stronger performance of other oil seeds such as soybean oil.

If one were to observe the movement of the CPO prices when they peak during strong rallies, it is sure to be followed by a free fall after that.

So when the CPO price started to touch stratospheric heights again this time, the sustainability at such a level comes into question again.

True to the saying that what goes up must come down, most experts in the field are bearish.

The direction of the CPO price took centre stage of the discussions during the recently concluded Virtual Palm and Lauric Oils Price Outlook Conference (POC) 2021.

According to Thomas Mielke, (pic below) the executive director of Oil World publisher ISTA Mielke GmbH, the market has either seen the highs or is now very close to the highs. “The prices will decline based on the bearish new crop fundamentals.

“Considerable bearishness coming from the prospective increase in sunflower from a higher northern hemisphere oil seed production. This will influence palm oil.

“The palm oil fundamentals itself are bullish because production is still depressed and the outlook for production is not bearish but palm oil will be affected by the supply increase and by weakening prices of the seed oils, ” he says.

Mielke stresses that the development of palm oil production is very important for the price trend and the pace at which vegetable oil prices will weaken for the remainder of the year.

He says this is due to palm oil being a dominant crop.

“So if the Malaysian and Indonesian palm oil productions recover only at a relatively moderate rate in the next couple of months, then the price trend for all vegetable oils will stay supported and the potential price decline will be very limited.

“Palm oil is important for the general price trend over the next couple of years. My opinion is that oil seed and vegetable oil prices will have to be higher in the years to come, so that oil seed plantings, investment in oil seeds, oil seed yields and oil seed production are being raised to compensate for insufficient growth in palm oil, ” he adds.

As far as Malaysia is concerned, the rate at which the palm oil production is able to recover all boils down to how quickly the labour issue can be resolved.

A pre-movement control order (MCO) survey by the Malaysia Palm Oil Board (MPOB) showed a shortage of 31,021 workers.

The figure is believed to have ballooned to about 50,000, according to recent estimates, and a loss of around 25% in palm oil yield.

Dr James Fry, (pic below) the chairman of commodities consultancy firm LMC International Ltd, believes that CPO is currently in a bubble and that it will pop. 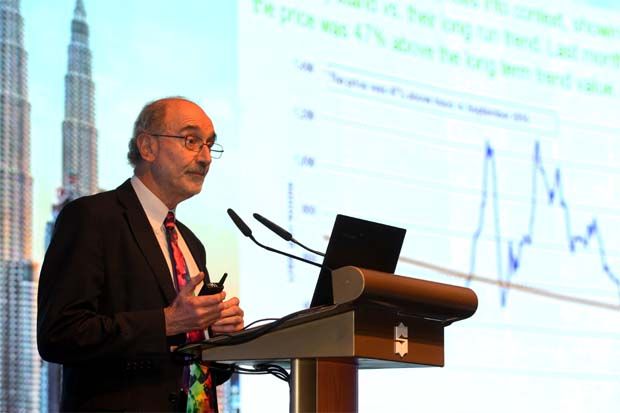 “Look at the valuations of Tesla and bitcoin. These are ridiculous. If I knew when it would pop and if I traded these things, which I don’t, I would be a massively short seller.

“But I’m not because I don’t do these things. You know it’s (CPO) going to change. It’s just a question of when, ” he says.

Fry forecasts Malaysia’s CPO production this year to come in under 19.5 million tonnes.

He says the recovery of South-East Asia’s CPO output will lead to a slow rise in MPOB stocks and as a result, the European Union’s CPO and Brent crude oil spread should drop from a massive US$700 to US$450 by the fourth quarter of this year.

Allowing for freight and export taxes, he estimated Malaysia’s CPO futures to trade near RM3,300 per tonne this year.

On the intensifying campaign against palm oil in Europe in recent years and the worst-case scenario for palm oil demand, Fry regarded it as a zero-sum game.

“If you take demand out of one market, the oil is still there. It will find an outlet in another market.

“I’m sure this will have shorter-term disruption in terms of flows. It is inevitable.

“But Europe and North America are a relatively small share of the world’s market for palm oil, ” he says, adding that the huge Asian market and the growing demand in both Asia and Africa will offset the losses.