PETALING JAYA: A total of 10 listed companies are among those that have won the country’s fourth cycle of large scale solar (LSS4) projects, which analysts predict will deliver a mid- to high-single-digit internal rate of return (IRR) for the award winners.

Of the overall listed winners, MIDF Research said Gopeng Bhd, Solarvest Holdings Bhd (pic below), JAKS Resources Bhd and Advancecon Holdings Bhd could see the most earnings impact. These four companies could record between 10% and 185% of annual earnings before interest, taxes, depreciation and amortisation (Ebitda) from their respective LSS4 wins, assuming a 6% project IRR.

Except for Tan Chong Motor, Advancecon and MK Land, all shortlisted bidders won 50MW in LSS4 capacity each, which is the maximum capacity allowed for a single bidder.

“Actual financial details of the individual LSS4 projects are still sketchy at this point, pending further disclosure by the respective companies.

“As a ballpark figure, however, we estimate about RM11mil to RM13mil incremental annual Ebitda for the 50MW LSS4 assets, assuming a project IRR of 6% to 8%, capital expenditure (capex) of RM2.5mil per MW, capacity factor of 16.7% and average tariff of 18.7 sen to 21.7 sen per kwh, ” MIDF Research said in a note yesterday.

It also pointed out that Solarvest is one of the best plays in LSS4, from the perspective of an earnings impact.

“Solarvest is also likely to benefit from engineering, procurement, construction and commissioning (EPCC) or operations and maintenance (O&M) contracts from third-party LSS4 asset owners, whereby it has put in EPCC bids of 1,000MW (via back-to-back arrangements with LSS4 bidders), although valuation is at a premium relative to other LSS4 winners, ” stated MIDF Research.

Yesterday, most of the LSS4 winners saw an increase in share prices as investors responded positively to the latest development. 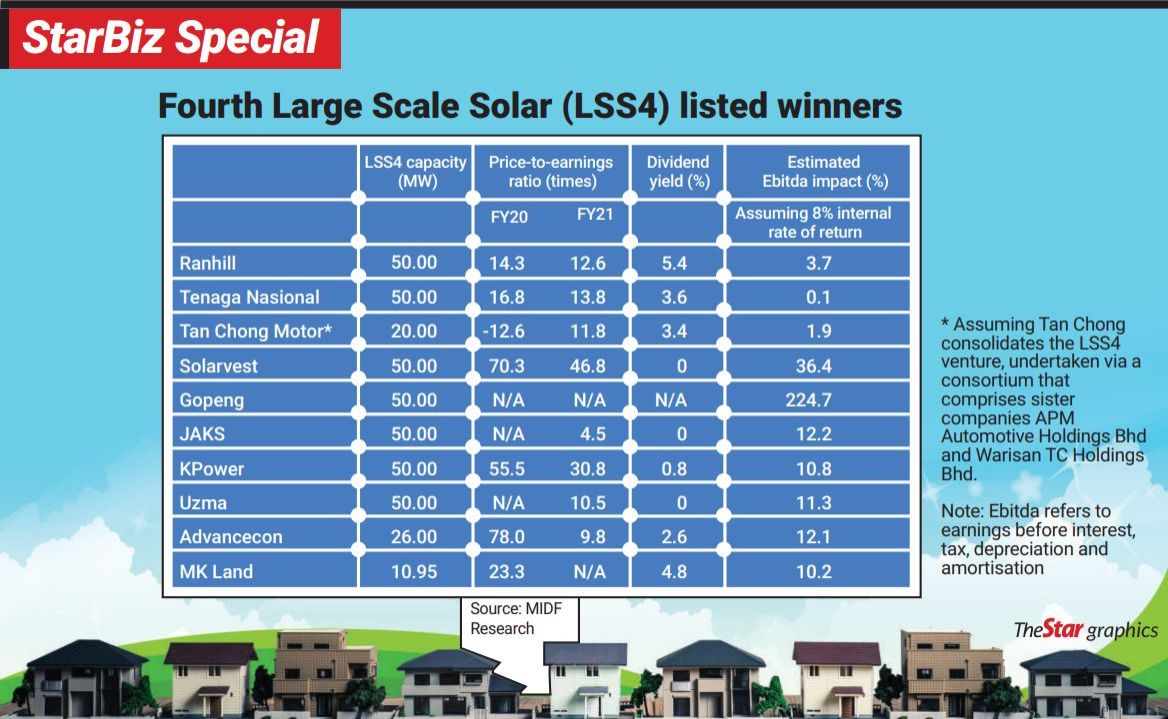 However, shares of Solarvest and JAKS declined by 5.69% and 2.08% respectively.

Kenanga Research said the capex for LSS4 projects could range from RM3mil to RM4mil per MW, of which about 60% to 70% would be EPCC-related cost, with the remainder being land cost.

However, it pointed out that the estimate could vary across different project owners.

The research house said that solar EPCC players such as Solarvest and Samaiden Group Bhd are likely to be the biggest beneficiary of the LSS4 programme.

“From what we gathered, Solarvest is confident that it would secure 200MW to 300MW capacity of EPCC jobs from the LSS4 alone, which would immensely boost its current orderbook of RM197mil.

“Meanwhile for Samaiden, we reckon that the group would be able to secure at least 100MW of EPCC jobs from the LSS4, boosting its current orderbook of RM185mil.

“We expect these companies to fetch roughly low-teen EPCC margins from the LSS4, ” said Kenanga Research.

, were not successful in their LSS4 bids. However, it said this was not necessarily negative for the companies, given rising panel prices.

“We note that panel prices have been climbing since the fourth quarter of 2020 due to supply tightness, thus project returns could be challenged, ” stated Maybank IB Research.

Last Friday, the Energy Commission (EC) announced the list of 30 shortlisted bidders of the LSS4, totalling 823.06MW out of the offered 1,000MW.

These players will then sign a 21-year power purchase agreement with TNB and these plants are expected to commence operations in 2022 to 2023.

Previously, StarBiz had reported that the LSS4 programme had attracted strong interest, with a total of 138 bids.