SHANGHAI: Sustained development of China’s capital market can be expected as the central government has confirmed its stance on perfecting the fundamental market mechanisms in the latest Government Work Report, said experts.

According to the report delivered by premier Li Keqiang at the opening of this year’s session of the 13th National People’s Congress in Beijing on Friday, continued efforts will be made this year to advance the reform of registration-based initial public offering (IPO) mechanism in the A-share market.

Registration-based IPO mechanism was first experimented at the Nasdaq-style STAR Market at the Shanghai Stock Exchange in July 2019. The mechanism was adopted at the technology-focused ChiNext in Shenzhen last August.

The plan said that delisting standards should be perfected and delisting procedure simplified. Public companies should be able to exit from the exchange in more ways while the delisting supervision needs to be reinforced.

Zhongshan Securities’ chief economist Li Zhan said that the work report has demonstrated the regulator’s resolution to remove the disqualified companies from the A-share market.

“The registration-based IPO reforms must be coordinated with a responsive delisting mechanism. It is only by controlling both the entrance and exit of the market can a deepened capital market reform be realised and a sound market order built. The combination of the IPO and delisting mechanism will generate a positive influence on the capital market,” he said.

The benchmark Shanghai Composite Index fell 0.04% on Friday, while ChiNext gained 0.7%. Experts from Jufeng Investment Information said the recent fluctuations in A shares will not alter the bullish trend in the long run. As the Covid-19 stabilises in overseas markets and profitability of A-share companies further improves, a new uptrend will emerge, the experts said. ─ China Daily/ANN 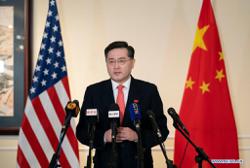