Massive profit: People walk by a SoftBank shop in Tokyo. The bank’s Vision Fund, which built up its 37% stake in Coupang for US$2.7bil, is today staring at a US$50bil target valuation for the South Korean e-tailer. ─ AP

TOKYO: SoftBank’s US$100bil Vision Fund is poised to have a new number-one asset in its portfolio with the upcoming flotation of top South Korean e-tailer Coupang, furthering a turnaround that has seen the fund yo-yo from huge losses to record profit.

The Vision Fund built up its 37% stake in Coupang for US$2.7bil, mostly at an US$8.7bil post-money valuation, a person familiar with the matter said. The fund is not expected to sell shares in the initial public offering (IPO) that Coupang filed for in New York, the person said, declining to be identified as the information was not public.

Achieving a US$50bil valuation would add to good news for the fund which is bouncing back from an annual loss in March. This month, it announced record quarterly profit, driven by the listings of DoorDash and home seller Opendoor Technologies Inc and share price rise of ride-hailer Uber Technologies Inc.

The fund has written big cheques for late-stage startups to fuel rapid growth, with two-thirds of the value of its portfolio concentrated in 10 assets including Coupang.

The 10 include 25% of British chip designer Arm – to be sold to Nvidia Corp pending regulatory approval – but not stakes in high-profile stumbles like office-sharing firm WeWork.

The fund’s largest assets include its 22% stake in DoorDash, whose share price has doubled since the firm’s December IPO, sending its market capitalisation to US$65bil.

SoftBank initially invested in Coupang in 2015, adding it to a stable of e-commerce hits that included 25% of China’s Alibaba Group Holding Ltd, before placing it under the fund.

The e-tailer has grown rapidly during stay-home policies while the Covid-19 pandemic has forced other portfolio firms like Indian hotel chain Oyo to scramble to preserve cash.

Analysts see Coupang’s US$50bil valuation as feasible, given its first-mover status and as it expands beyond replacing brick-and-mortar retail with a rising number of online channels. It is the biggest e-tailer in South Korea that directly handles inventory, with 2020 purchases at about 21.7 trillion won (US$19.62bil), showed data from WiseApp. 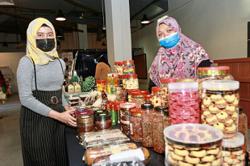