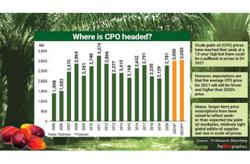 Under the new pricing control regime, the RON95 grade petrol will not exceed RM2.05 per litre, while the maximum price for diesel was set at RM2.15 ringgit per litre.

Govt caps fuel prices as crude soars past US$60

THE finance ministry on Wednesday announced it will cap fuel prices below 2019 levels as the benchmark Brent crude futures reached its highest in 13 months.

Under the new pricing control regime, the RON95 grade petrol will not exceed RM2.05 per litre, while the maximum price for diesel was set at RM2.15 ringgit per litre.

The move will also put a lid of transport cost, easing the burden on consumers and businesses.

Crude oil prices in the international market have rallied since November as governments worldwide kicked off vaccination drives for Covid-19, while putting in place large stimulus packages to boost economic activity.

Brent crude futures, the global oil benchmark, breached US$60 a barrel this week for the first time in 13 months.

The rising price of crude oil in a positive boost to the government’s coffer, which counts a significant portion of its income from oil related revenues.

The government, in its Budget 2021 assumed that crude oil to trade at least US$45 a barrel this year.

THE Employees Provident Funds, which manages close to a trillion ringgit worth of assets, has named Datuk Seri Amir Hamzah Azizan as its new chief executive officer (CEO) effective March 1.

(TNB), will take over the post from outgoing Tunku Alizakri Alias.

Tunku Alizakri, 50, joined EPF seven years ago as deputy CEO (Strategy) before he assumed the top role in August 2018.

Amir Hamzah, 53, brings with him more than 25 years of corporate experience, beginning his career with the Shell Group of Companies before serving as CEO for MISC Bhd

He joined TNB as president and CEO in April 2019.

This represents the highest quarterly CPO price achieved since the first quarter of 2011.

Output, however, was lower as yields were affected by heavy rainfall in some palm oil regions and labour shortage issues.

The tight palm oil stockpile level and rising soybean prices are likely to keep CPO price elevated in the near term.

OFFSHORE drilling rig contractor Seadrill has filed for bankruptcy protection at a court in the US state of Texas, it said on Wednesday.

This is the second time in four years the company has entered into so-called Chapter 11 restructuring.

Earlier on Monday, Seadrill has filed the Chapter 11 for its Asian businesses.

said its joint venture in Brazil is not affected by its partner Seadrill bankcruptcy filing of its subsidiaries in Asia.

Seadrill first filed for Chapter 11 in September 2017, emerging in July 2018 after converting US$2.3bil of bonds into equity and raising more than US$1bil in fresh capital.