Deepwater drilling contractor Seadrill Ltd has filed for bankruptcy protection for its Asian units.Sapura Energy Bhd has been in a joint venture with Seadrill in Asia.

PETALING JAYA: Deepwater drilling contractor Seadrill Ltd has filed for bankruptcy protection for its Asian units following the impact of the Covid-19 pandemic on the global economy.

“The Chapter 11 cases were filed as a protective measure to support Seadrill’s broader comprehensive financial restructuring and will in no way affect the safe and efficient operation of the offshore drilling units.

“The company will request authority to pay its key trade creditors and employee wages and benefits without change or interruption and expects it will pay all suppliers and vendors in full under normal terms for goods and services provided during the Chapter 11 cases.”

Chapter 11 refers to protection from creditors that is given to a company in financial difficulties for a limited period to allow it to reorganise.

As a consequence of the Chapter 11 filings, Seadrill said the forbearance agreement announced by the company on Feb 3,2021 in respect of nine out of the group’s 12 senior secured credit facility agreements has terminated.

has been in a joint venture with Seadrill in Asia.

According to a report by AmInvestment Bank last year, the Sapura Energy/Seadrill JV was estimated to have contributed to a pre-tax profit of RM123mil in the first half of oil and gas (O&G) firm Sapura Energy’s financial year 2021 ending Jan 31.

This, the research house said, is compared to the group’s pre-tax profit of RM90mil, which includes contract adjustments and variation orders amounting to RM82mil, with all six pipe-laying support vessels (PLSVs) which are currently being used.

On June 28,2014, Sapura Navegacao, a 50:50 JV between Sapura Energy and Seadrill, started its operations in Brazil. The 550-tonne Sapura Diamante, the first of six PLSVs, started work more than three months ahead of its contractual delivery date.

In September last year, Sapura Energy and Seadrill became part of a corruption probe in Brazil for alleged bribery, with regards to contracts related to Brazilian state-owned oil company Petrobras.

Seadrill was founded in 2005 by Norwegian-born shipping tycoon Fredriksen, who turned it into the crown jewel of his business empire.

However, the fall in crude prices in 2014 saw the company reducing its operations as O&G companies cut their spending on rigs.

Bloomberg reported yesterday that Seadrill completed an overhaul of its finances in July 2018, but left without bankruptcy protection with bank debt of almost US$6bil (RM24bil).

“The drilling market recovered at a slower pace than the company had expected and Seadrill engaged in talks with creditors again last year.” 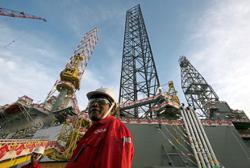