Pharmaniaga confident of getting approval soon

Pharmaniaga will be the first biggest player in the race of developing its own Malaysian-made halal vaccines by 2024.

WITH the vaccine rollout starting to take on more influence throughout the world and even here in Malaysia, it was no surprise that the pace of Malaysia’s own programme has started to flesh out in greater detail.

That in turn has seen companies, which have long been entrenched in the healthcare theme, beginning to reveal more developments of their strategies.

But more significant news to the investment world in this country was the statement issued by the Securities Commission (SC) to local listed companies announcing plans to be involved in what many see as a money-making venture.

The regulator warned it would take action against any listed entity that disseminates false or misleading statements in a bid to influence share prices.

The latest warning came following companies that have announced vaccine deals claiming that they had obtained approval by the Health Ministry to distribute Covid-19 vaccines in Malaysia.

The SC said chief executive officers of listed companies must exercise care and diligence when making any announcement in their filings with Bursa Malaysia.

That is a view also shared by Pharmaniaga Bhd

managing director Datuk Zulkarnain Md Eusope, (pic below) who told StarBizWeek that companies should be accountable and not make misleading statements to influence the share prices of their companies. 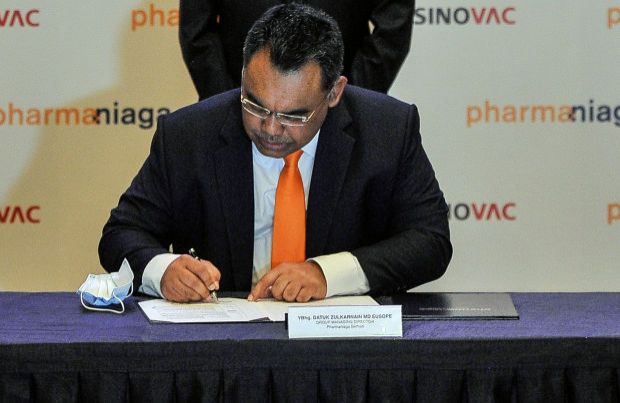 “We must be accountable and ensure that we don’t make misleading statements to the public, ” he says.

The only vaccine that has been approved by NPRA is the one by Pfizer, which was developed with BioNTech.

The vaccine is on track for delivery in the country on Feb 26.

The government has signed two deals with Pfizer to secure 25 million doses of the vaccine.One thing remains clear, none of the other companies have obtained the green light from the National Pharmaceutical Regulatory Agency (NPRA) to distribute the vaccines.

The NPRA is the professional regulatory body that would make the call on which vaccine is safe to be supplied in the country.

Pharmaniaga has secured the contract from the Health Ministry to supply CoronaVac, the Covid-19 vaccine from China’s Sinovac Life Sceinces Co Ltd.

Zulkarnain expects the NPRA to give the company an approval for the vaccine by next month.

Although Pharmaniaga was asked to supply more doses after the frontliners delivery, Zulkarnain is enthusiastic that his team is ready to kick start the distribution of CoronaVac as soon as NPRA gives the approval. “We are ready, the team is ready, our plant is ready and our expertise is ready. So there is no problem in distribution of the vaccines in accordance to the government’s requirement, ” he says.

Having said that, Zulkarnain does not foresee any challenges to produce the vaccine from the fill and finish (F&F) facility plant that has the capacity to produce two million doses of vaccines per month.

The group’s F&F facility plant, built for RM100mil, was retrofitted for an estimated cost of RM3mil.

Should there be a heightened demand of CoronaVac orders from other countries, Zulkarnain says the group can look into expanding its F&F capacity if China’s Sinovac requests Pharmaniaga to become a contract manufacturer.

Looking ahead, he points out that the Covid-19 vaccine will have a positive impact on its earnings from third quarter ending Sept 30,2021 onwards.

Many analysts say that the impact to Pharmaniaga’s earnings are expected to be minimal as margins are lower for both F&F as well as distribution of the vaccine.

Given the profit before tax for the group’s logistics and distribution segment being thin by averaging at 0.5% over the last 20 quarters, Zulkarnain says the supply of vaccines would generate more jobs for Malaysians in the challenging operating environment.

He discloses that five Malaysian-made vaccines would be fill finished by the largest listed pharmaceutical group, to make its way in the domestic and international market in the next three years. But Pharmaniaga has been tight-lipped about the type of vaccines entering the market, although it had mentioned that the vaccine would be halal.

Last year, the healthcare group hinted that the vaccines being developed were to get babies vaccinated.

Zulkarnain indicated that some vaccines developed would be to protect against common infections which are also available in the national immunisation programme.

“By 2024, five vaccines will be supplied to the market. We will develop them in Malaysia and export them mainly to tropical countries as these countries are more suitable for the vaccines to fight against common infections, ” he says. The details of the vaccines, however, will be announced by the first quarter of next year, according to Zulkarnain.

Two years ago, the formulation to develop these halal vaccines started with five technology partners namely from Thailand, China, South Korea, India and Russia, providing their know-how advisory services to develop these vaccines.

Pharmaniaga’s plan was to be recognised as the world’s first halal vaccine producer.

But other than that, is there a much bigger ground plan to have this facility?

Zulkarnain confides that the group is in preparation to safeguard the country from future shocks of a pandemic, which could pose as a threat to national security. “This is why the government is looking at us as a company to bring in the transfer of technology and develop our own vaccine if there is another pandemic, ” he says.

With nationalism of the Covid-19 vaccine on the rise, a worrisome trend has been emerging where many poor countries are scrambling to secure sufficient doses. As such, it appears that wealthier developed countries will succeed in vaccinating most of their citizens by this year as they snap up millions of doses, while others could lag behind into next year or even later.

The World Health Organisation has urged countries to prioritise Covax, an initiative to secure vaccines for low and middle-income nations.

Should there be another pandemic, Zulkarnain believes that Malaysia will be ready to supply its own vaccines to an estimated 32 million population as the group is gearing up to be a halal vaccine supplier.

The development of world’s first halal vaccine facility is on track to be completed by next year, he notes.

Zulkarnain, who was appointed in September last year, has a clear vision to expand Pharmaniaga internationally.

“I am looking at the business model on positioning the group, not only in the South-East Asian region, but around the globe, ” he says.

After all is said and done, Pharmaniaga hopes to be the biggest player in the race of developing Malaysian-made halal vaccines by 2024.