In this photo provided by the New York Stock Exchange, the presidential inaugural plays on a screen as trader Timothy Nick works in a booth on the trading floor, Wednesday, Jan. 20,2021. U.S. stocks are rallyed to records Wednesday on encouraging earnings reports and continued optimism that new leadership in Washington will mean more support for the struggling economy. - AP

NEW YORK: U.S. stocks closed at record highs on Wednesday as Joe Biden was sworn in as the 46th U.S. president, while solid results from Netflix sparked a rally in shares of "stay-at-home" beneficiaries.

Shares of the world's largest streaming service Netflix surged 16.85% after the company said it would no longer need to borrow billions of dollars to finance its TV shows and movies.

The rest of the FAANG group, due to report results in the coming weeks, jumped with Google parent Alphabet Inc rising 5.36%. The NYSE FANG+TM index gained 4.77%.

"It's a tech outperformance day which is pretty rare over the past two or three months as the cyclical rotation has kind of gotten underway," said Ross Mayfield, investment strategy analyst at Baird, in Milwaukee, Wisconsin. He added a lot of the move can be traced to Netflix.

"(Today was) just a reminder that the tech run had gotten extended... the FAANG names and some of the other S&P 500 tech names are still incredible operators and are going to be putting out incredible earnings quarters for the foreseeable future," Mayfield added, referring to Biden's proposed $1.9 trillion spending plan.

Biden will waste little time turning the page on the Trump era, aides said, signing 15 executive actions in the afternoon on issues ranging from the COVID-19 pandemic to the economy to climate change.

"I'm not sure that the politics of inauguration day did much but certainly the expectation for a trillion plus in stimulus," Mayfield added.

Wall Street's main indexes scaled record highs in the past few months, with the blue-chip Dow jumping about 13% since the presidential elections in November, as investors bet on a strong economic recovery in 2021 on the back of COVID-19 vaccine rollout and a bigger pandemic relief plan.

Nearly all of the 11 major S&P sectors advanced in afternoon trading, with communication services, consumer discretionary and technology among the biggest gainers.

Wrapping up results from major U.S. banks, Morgan Stanley slipped 0.2% despite posting quarterly profit that blew past estimates driven by strength in its trading business.

The broader banks index shed about 1.34%, declining for the third day.

With stock market valuations sitting near a 20-year high, investors are hoping corporate results and profit outlooks will help them determine to what degree the valuations are justified.

Procter & Gamble Co raised its full-year sales forecast for a second time as it benefited from sustained coronavirus-driven demand for cleaning products. Its shares, however, fell 1.25% after it warned that the pace of sales might slow as vaccines roll out.

UnitedHealth Group Inc dipped 0.38% after the health insurer's quarterly profit slumped nearly 38%, weighed down by costs related to its programs to make COVID-19 testing and treatment more accessible for its customers.

Advancing issues outnumbered declining ones on the NYSE by a 2.02-to-1 ratio; on Nasdaq, a 1.24-to-1 ratio favored advancers. 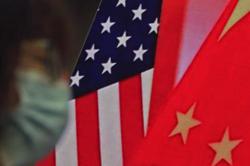