A challenge of integrating Tiffany

Tiffany will be dropped from the Standard & Poor’s 500 Index now that the deal has been approved, S&P Dow Jones Indices said this week in New York, with the jeweller replaced by Enphase Energy Inc.

Tiffany shareholders voted overwhelmingly to support the deal at a virtual meeting, according to LVMH. The transaction, valued at almost US$16bil, is expected to close in early 2021.

The vote was a key step in the year-long saga over the luxury industry’s biggest takeover. The parent of Louis Vuitton had agreed to buy the iconic jeweller before trying to back out of the deal when the coronavirus pandemic upended the retail world.

That prompted a lawsuit by Tiffany and some harsh words from both sides, and the companies eventually agreed to see the deal through at a slightly reduced price.

Now LVMH faces the challenge of integrating Tiffany. Changes at the jeweller may include a product overhaul, a review of its store network and a more aggressive digital marketing strategy, according to analysts. Management changes may also be in store, since Arnault tends to put his own loyalists at the helm of new companies to tighten control.

The two companies announced in October that they’d reached an agreement, whereby LVMH would buy Tiffany for US$131.50 a share, down from US$135 originally promised.

Tiffany shares were little changed at US$131.35 yesterday in New York and are down about 1.7% in a tumultuous year for any retailer – let alone one trying to keep a merger intact.

Tiffany had accused LVMH of having “unclean hands” when the French side initially abandoned the deal.

LVMH in turn disparaged Tiffany for mismanagement of the business during the pandemic, while spending unwisely on dividends.

Making matters messier still, the French government was dragged into the showdown after Arnault requested the help of Foreign Affairs Minister Jean-Yves Le Drian to extricate itself from the deal. The two companies were set to face trial at the start of next year in the US

Besides Louis Vuitton handbags, the LVMH conglomerate includes Loro Piana cashmere, Bulgari jewellery and Dior haute-couture, among many others. The company’s shares were little changed yesterday after the shareholder vote, trading at €513 in Paris.

Like others in the business, LVMH struggled with the fallout of the coronavirus pandemic.

Lately China has led a rebound in consumer demand, and Bain & Co estimates that the personal luxury goods market may grow by as much as 19% next year.

But the industry probably won’t recover until the end of 2022 or 2023, according to Bain. — Bloomberg 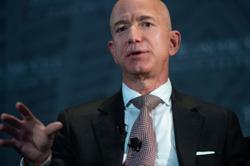