Remedy soon: A giant digital advertising board on Covid-19 is seen in Kuala Lumpur. So far, no company has come up with an estimated price tag for sourcing the vaccine except for Metronic Global Bhd.

AFTER gloves, a slew of listed and unlisted companies have jump on the bandwagon to procure and distribute Covid-19 vaccine for Malaysia. The vaccines are largely sourced from pharmaceutical producers based in China and Taiwan.

So far, no company has come up with an estimated price tag for sourcing the vaccine except for Metronic Global Bhd

Metronic Global, which has signed a memorandum of understanding (MoU) with Medigen Vaccine Biologics Corp of Taiwan, expects to achieve a profit of RM180mil from the “fill and finish” and distribution of the vaccine.

Following a query from the regulators, the company stated that the profit is derived based on a 30% margin from the sales price of the vaccine that is estimated at US$50 (RM203) each. It expects to bring in three million vaccines from Taiwan, subject to regulatory approvals of the local pharmaceutical authorities.

It’s simply perplexing how a company would dare issue a statement on potential profit and margins that are unrealistic and get away with it.

Firstly, profit numbers are price-sensitive information and should not have been disclosed when the agreement is only at the MoU stage. Secondly, a 30% margin on vaccine distribution business could be ambitious considering that there are many other vaccines from more established pharmaceutical companies that are going to hit the market.

And some of it is even far cheaper than US$50. For instance, the vaccine being produced by AstraZeneca-Oxford University is less than US$8 and meant specifically for developing nations.

And finally, Metronic Global has not even got regulatory approvals, which may be difficult, and yet is already making a public statement on potential profit.

Obviously, the statement was meant to catch the eye of speculators looking for companies with an exposure to the vaccine theme. And rightly, Bursa Malaysia forced the company to make additional disclosures with the view of enlightening investors of the true state of affairs.

However, shouldn’t the company’s principal office bearers be subjected to some kind of reprimand or warning considering that profits are sensitive information and should not have been disclosed at all in the first place? 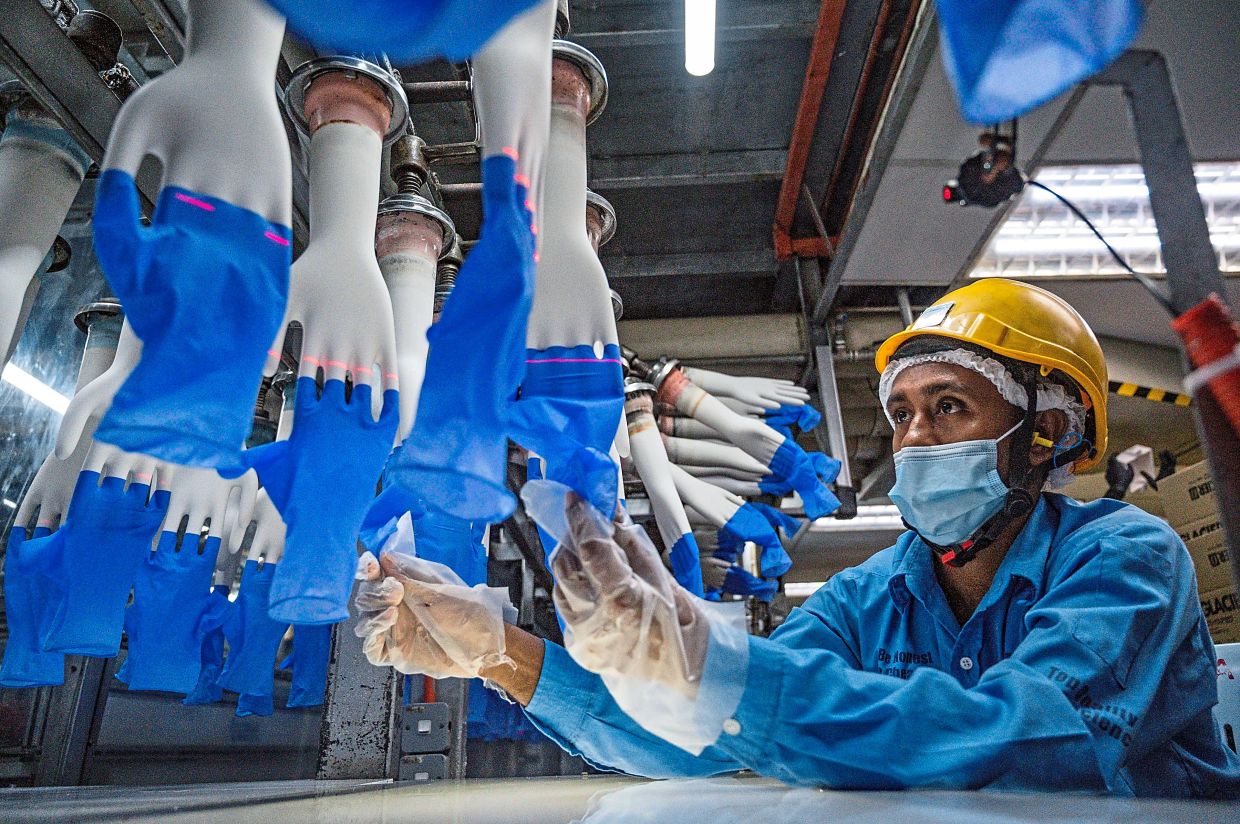 Share buyback: A worker inspects disposable gloves at Top Glove factory in Shah Alam. Since September, the world’s largest medical glove maker has spent close to RM1.14bil to buy back its own shares from the market. — AFP

’s aggressive share buybacks over the last few months is surely one for Malaysia’s corporate history books. Since September, the world’s largest medical glove maker has spent close to RM1.14bil to buy back its own shares from the market, indulging in the exercise almost everyday in the last two weeks.

True, share buybacks are a perfectly legal way of rewarding shareholders. They are described as a way to return capital to shareholders. Even Apple and Berkshire Hathaway continue to aggressively buy back their shares. Companies with excess cash have other options though – return cash directly to shareholders in the form of cash dividends or reinvest the money into the business or even acquire a new business.

Top Glove must be convinced that the best way to spend that RM1bil or so is to buy back its stock and not, say, pay out its cash in dividends. The stock only enjoys a dividend yield of under 2%. But despite the aggressive buybacks, the stock is down 16% this month, losing over RM10bil in its market capitalisation. Hence, one wonder what Top Glove’s share price would be if not for the buy backs?

So what comes next? Top Glove will have to account for these big buyback spend come its financial close. Accounting standards will require the company to mark to market the stock it is holding in its treasury following the buybacks. If the cost of that holding is lower than the market price of Top Glove’s shares at the accounting cut-off date, then the company would have to account for this, taking a hit to its profits.

And if the overall profit number does come in lower due to, say, reduced average selling prices of rubber gloves, then the hit to the bottom line could be significant.

THE government’s recent announcement that it will now implement an auto-approval mechanism for the moratorium on loan repayments for those in the B40 group as well as micro and small and medium enterprises (SMEs) has critics up in arms, calling it a populist move.

They argue that the B40 particularly do not form a substantial part of most banks’ loan portfolio anyway, so this move is relatively insignificant.

While it is generally true to a certain extent that those in the lower-income bracket do not borrow in huge amounts compared to those in the higher-income brackets simply because they do not generally buy expensive big-ticket items, banks will also have to take a hit somewhere along the line, however small the impact is.

To be sure, this week’s announcement, which singled out the B40 and SMEs, is not entirely new as even before this, individuals and businesses who cannot make good on their loans could approach the banks for help.

Which brings us to the more pertinent issue of banks and their future earnings – most lenders yesterday announced financial results that were very much lower than the previous years’ results.

No surprises there as banks, like most businesses, are also getting hit by the Covid-19 pandemic.

With the targeted moratorium and, now, this move in place, coupled with consumers tightening their belts due to the ongoing pandemic, one can almost safely say that the earnings of banks will continue to be impacted.

So far, for this financial year, most banks have not declared any dividends – a first for many.

Will they do so in the fourth and coming quarter?