A defining week ahead with US election, budget

NEXT week will be a busy week with the focus on the United States presidential election, which takes place on Tuesday, with heavy expectations that Democratic candidate Joe Biden will emerge winner with a convincing victory over the 45th US president, Donald Trump.

At home, all eyes will be on Parliament when it convenes on Monday as the political temperature has risen by few notches following last Sunday’s move by the Yang di-Pertuan Agong to deny proclaiming an emergency as requested by the prime minister.

In addition, on Nov 3, the Monetary Policy Committee (MPC) meets for the final time in 2020 and there is a strong likelihood that there will be a cut in the benchmark overnight policy rate (OPR) by another 25 basis points (bps) to 1.5% – the fifth cut in six meetings and bringing the benchmark rate to a new record low. All in, if the central bank goes for that final cut, the 3% OPR at the start of the year would be cut by half. A 25-bps cut this round would be justified given the conditional movement control order (CMCO) in key economic zones and the current rise in the number of Covid-19 cases.

On top of the three events next week, the market too will be looking at the details of Budget 2021 to be tabled by the Finance Minister next Friday, Nov 6, while a vote on it will be crucial to ensure the nation’s finances and plans for next year are approved by the lawmakers.

By this time next week, Budget 2021 would have been unveiled and we can start comparing notes as to how much what was expected by the market, corporates, individuals or the man on the street has been met and where it fell short of expectations. As usual, there will be disappointments while surprises are expected to be fewer this time around, especially in the form of any new or higher taxes, given the challenging economic environment.

While the budget to be tabled by the Finance Minister is expected to address four key elements – creating a better government, caring for the people, steering the economy, sustainable living and enhancing public service delivery – there is also a need for the budget to be holistic and realistic. 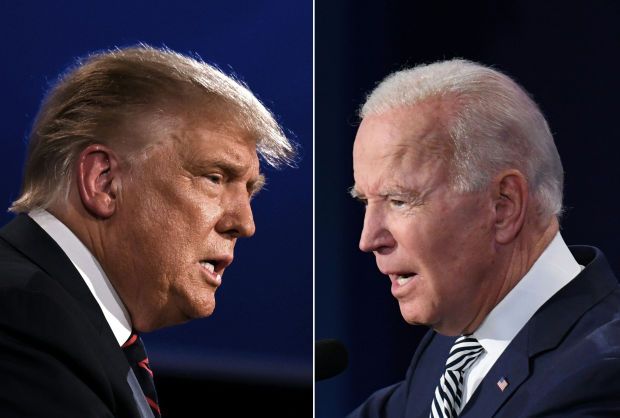 Given the economic hardship faced by the people in the pandemic and challenges faced by businesses, and for some, just trying to make ends meet, the budget needs to address short-term challenges quickly. The government’s massive stimulus and aid packages to the tune of RM315bil under the various incentives announced to-date, of which some RM55bil are actual cash aids, are already impacting the government’s finances to a certain extent.

But, of course, given the circumstances, it is the government’s duty to provide the necessary aid and there is indeed no harm in the form of higher debt/GDP or bursting of the budget deficit ratios for this year or into 2021.

While budget measures are mainly focusing on taxes or relief, which has been widely discussed in the media, the focus of this week’s article is on three key figures – GDP growth for this year and 2021, the debt/GDP ratio and the expected budget deficit level which the government should be able to tolerate, given the pandemic’s impact on livelihoods and the economy.

As Malaysia posted a GDP contraction of 8.3% in the first-half (H1) of 2020, it is estimated that the H2 will see some recovery in the data with a smaller contraction and allowing the year to end with the economy shrinking by between 5% and 6% this year. This will result in nominal GDP falling to approximately RM1.42 trillion for the year from RM1.51 trillion at the end of 2019.

For 2021, it is expected that the Malaysian economy will rebound strongly by about 5%-6% on the back of global economic momentum as well as from the low base effect due to this year’s GDP contraction.

Based on Bank Negara’s statistics, Malaysia’s total federal government debt as at the end of the second quarter (Q2) of 2020 stood at RM854bil, and this suggests that as at the end of June itself, Malaysia’s debt/GDP had reached 60.1% based on the expected full-year nominal GDP – just a whisker above the newly self-imposed ceiling of 60%. 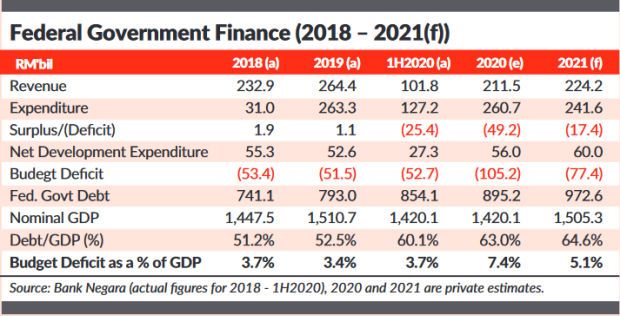 During the first six months of 2020 itself, the government had raised its total debt by approximately RM61.1bil or 7.7% as it spent on its various economic packages. Some of the debt raised is meant to be spent in the H2 of 2020, as the government’s financial accounts showed total net borrowings of about RM39.8bil for H1 of 2020.

With the current debt/GDP ratio at just above 60% as at end June-2020, it is expected that this figure will increase to about 63% by end-2020. It is also likely that we are going to see an even higher debt/GDP ratio of about 64.6% next year, as the government is expected to sustain some of its aid packages for businesses and for the vulnerable groups. Assuming further cash aid packages of RM20bil are rolled out next year, the government’s total debt is expected to increase to about RM973bil by end-2021, which is an increase of RM77bil year-on-year.

Due to the massive aid packages rolled out this year, the government’s budget deficit is expected to increase by four percentage points to 7.4% this year, before trending lower to just above 5% in 2021. The hike in the government’s debt/GDP or budget deficit figures are not totally unexpected, as the government needs to address the challenges faced by businesses and individuals. Hence, the higher debt/GDP ratio, which may hit even up to 65% in 2021, is only a temporary misalignment and should normalise as the economy expands in the post-pandemic era.

While Budget 2021 is not expected to be burdensome to businesses or individuals, it is time for the government to start planning to raise tax collections as it is rather dire to see the government’s tax revenue dwindling year after year as seen in Chart 1.

In 2019, the government’s tax revenue as a percentage of GDP fell further to just 12.2% and the worrying factor for the government is that it is simply not taxing enough. Chart 2 summarises the growth of both tax revenue and nominal growth and from the chart, it is clear that growth in the tax revenue has lagged nominal GDP growth significantly since 2013.

While Budget 2021 is not expected to see significant efforts put in place in the form of new taxes (to be read as Inheritance Tax or Capital Gains Tax, which this column has been calling for the past couple of years), it is hoped that the ground work is put in place to introduce new taxes to increase government revenue. With official government debt reaching near the RM1 trillion mark by end-2021, the government cannot afford to keep running budget deficits year-in, year-out without a comprehensive plan to increase its revenue. 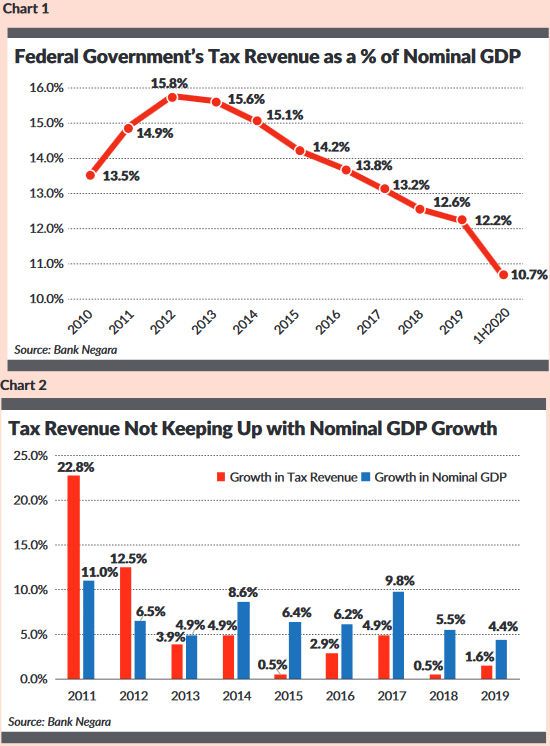 Perhaps, it is time for the government to re-look the high excise duty structure in Malaysia for both the tobacco and alcoholic beverage sectors. The aim here is to garner a larger tax base and revenue. The lost revenue to the government is just too huge to ignore and a holistic approach is needed. By lowering the duties, the price differential between legal and illegal products will be reduced and that could trigger a lower incidence of the illicit trade, as margins will then be eroded for these traders.

Indeed, the first week of November will be a defining week for the year as the outcome of the US presidential election may alter the global economic outlook and US foreign policy, going forward. On the local front, the MPC’s meeting aside, the upcoming Parliament sitting and the tabling of Budget 2021 next Friday is a test of political leaning from both sides of the divide, but for the sake of the people and the nation, it is hoped that the 221 MPs can put aside their political differences for the betterment of the country and its people.