As the Covid-19 pandemic continues to impact the lives of Malaysians, mobile operators have seen a huge surge in network utilisation as more people opt to work from home and practise physical distancing.

“The importance of a resilient network and connectivity to Malaysians has gone up three or four-fold because people are confined to their homes and finding new digital ways to generate income.

“Our challenge is how do we make sure that this goes without interruption, and how we continue to upgrade the capacity to meet the demand, ” said Celcom Axiata Bhd chief executive officer Idham Nawawi.

Mobile connectivity has become a necessity in a rapidly changing world where businesses and consumers are linked via instantaneous communication and data access.

As Malaysia’s widest LTE network, Celcom has deservedly earned a reputation for being the widest in 4G availability nationwide and low latency for streaming and gaming without delays.

The telco provides both prepaid and postpaid mobile and digital services with close to 9.1 million subscribers and caters to over 12 million users on its 2G, 3G and 4G LTE networks. 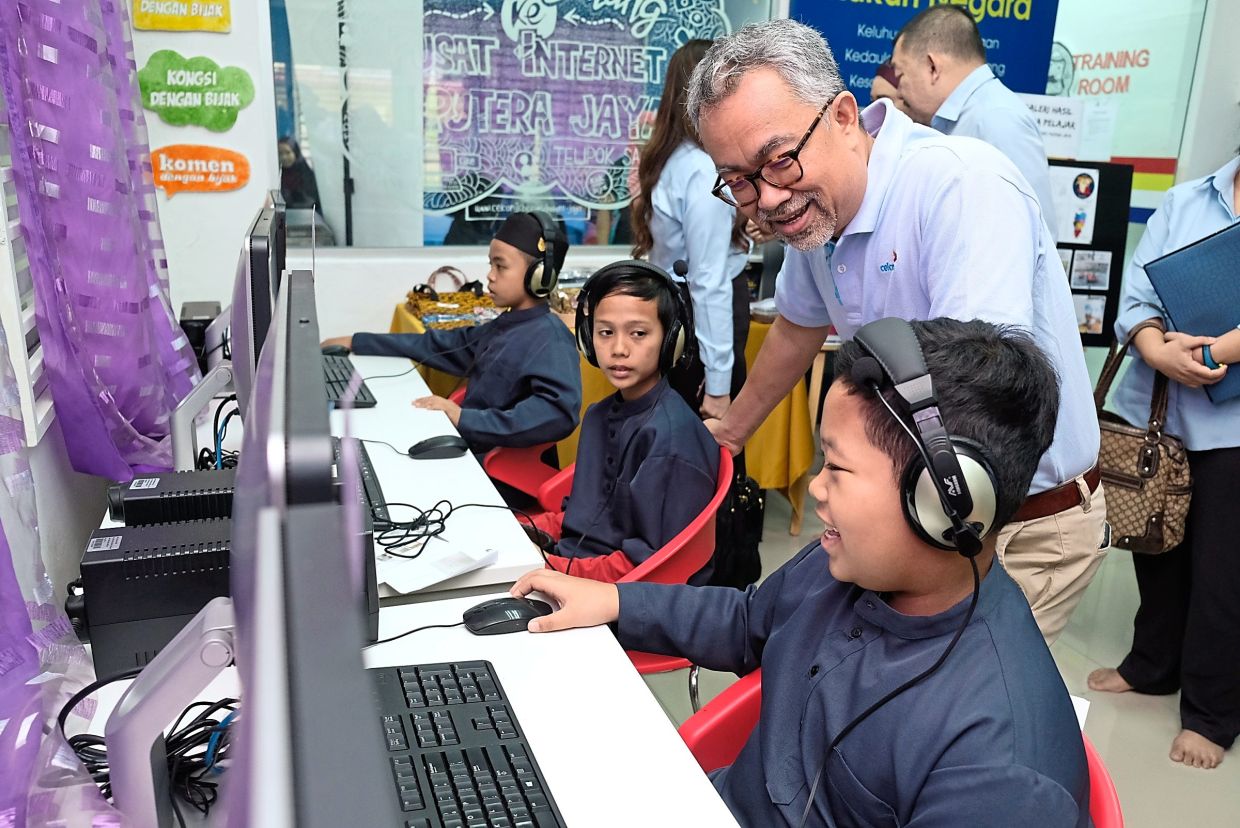 Beyond profit: Celcom has an inclusive digital nation-building aspiration.

However, a network outage that started around 3pm on Oct 4, which resulted in services being gradually restored at 6pm on the same day, left the mobile operator’s customers venting their frustration on social media.

Idham said the company regrets the network outage and said, “I have personally apologised to our customers. We have taken proactive measures to ensure we have the best resilient network.”

The telco veteran explained that the prolonged network disruption was due to a software bug in a router, which prevented the network from usually recovering in a matter of minutes, after a power outage.“We have fixed the software bug that caused the prolonged three-hour network outage. Due to the incident, we are also reviewing all other elements of the network, not just in our main data centre, but also our power systems, our backups, the uninterruptible power source, making sure that they are all at top notch conditions.

“We have been very proactive in strengthening the reliability of our network, minimalising the probability of such an incident of this scale again, ” he told StarBiz in a recent interview.

He said in mitigation, what is important is how fast the company responded and reacted, as well as the proactive measures it continues to take.

Idham reiterated, “Celcom responded to the emergency with immediate urgency as we understood what this outage meant to our customers – especially those whose businesses rely on our network; what it must have been like for them and we can’t give them back their Sunday.”

As Celcom’s network restored gradually from 6pm onwards, Celcom immediately offered all customers free data access from 6pm to 12 midnight on the same day. This was followed by a second offering on 11th October, where Celcom had a ‘Feel Good Sunday’ promotion where users enjoyed free unlimited high-speed data for six hours from noon till 6pm.

Idham said, “Celcom places emphasis on its customers continuing to enjoy the network - whatever they need to do without interruption, wherever they need and want to be.”

“We will also continue to innovate our products and make our services even more accessible, especially to those whose income may have been affected by the current economic slowdown, ” he said, citing Celcom’s ‘Truly Unlimited Prepaid’ deal launched on June 9, which costs RM35 monthly for unlimited data and calls, as an example.

Celcom’s widest 4G LTE network is deployed with the latest end-to-end technology such as 4T4R multiple-input and multiple-output (MIMO), carrier aggregation, 256 quadrature amplitude modulation (QAM) and many more, at over 11,000 sites that includes almost 10,000 LTE sites. This results with its LTE network achieving a 96% population coverage in 10 states nationwide. “Our network’s resiliency is also important as we move forward into bringing in 5G into the country, ” Idham said.

Looking beyond profitabilityIdham pointed out that Celcom has been operating for 33 years and is a homegrown brand with the oldest and widest mobile network in the country.

“We are customer-centric and very conscious about inclusivity. Our pricing and packages are designed to cater to the needs of all Malaysians. It is not just about ringgit and sen; while we continue to give returns to our shareholders, we do it in a very responsible way.

“We do things with social impact as a Malaysian company, which is run by Malaysians for Malaysians.”

He added that Celcom has an inclusive digital nation-building aspiration and cites its digital entrepreneurship initiatives to empower the underserved as an example.

These initiatives include DesaMall and Desa Harapan, which have facilitated training and knowledge sharing for over 1,500 rural entrepreneurs to embark on e-commerce businesses since 2018, in collaboration with the Ministry of Rural Development.

There is also the Mahir Digital Felda that targets youths within the communities of Celcom’s Pusat Internet Felda nationwide to equip them with digital entrepreneurship skills.

Meanwhile, the KPT-Celcom Siswapreneur initiative is a collaboration with the Ministry of Higher Education, private and public higher education institutions to develop entrepreneurship skills and mind-set among students.

“We go beyond just giving connectivity. Inclusive digital nation-building is about making sure everybody’s included. So, we have programmes to help the rural communities to get on to the e-commerce bandwagon – we help to facilitate training and work with third parties. For example, we also have Suri Mall, meant for housewives. I met one of the participants from a rural part of Sabah; she said her product now reaches Australia! That’s what inclusivity means to us, ” said Idham.

Building an inclusive digital nationIn March, the Covid-19 lockdown had impacted microbusinesses, and Celcom, together with Axiata Group Bhd

, edotco Group and Axiata Digital also launched a RM150 million cash fund to provide financial assistance, in the range of RM1,000 to RM10,000 and on favourable terms, to micro-SMEs.The programme includes an initial contribution of RM20 million from the Finance Ministry.

This is targeted to benefit an estimate of 150,000 micro-SMEs within the Boost, Aspirasi and Celcom ecosystem.

Most importantly, by leveraging Aspirasi’s advanced digital technology, micro-SMEs only need to undergo a quick three-minute online process and if approved, funding is made available in 48 hours in their bank accounts.

This allows for ease of applications to be made during the movement control order period and for funds to be quickly and efficiently disbursed to businesses in need, with minimal or no human intervention.

“So that’s how we look at things, from our inclusive digital nation-building aspiration. It’s a win-win-win situation as we collaborate within our own ecosystem for the benefit of everyone involved, ” said Idham.

In July, the telco also announced the Celcom Business Suite, which is a one-stop SME digital kit to rapidly transform and optimise business operations.

In partnership with MDEC, Celcom Business Suite offerings also qualify SMEs to get a 50% matching grant of up to RM5,000 for any subscription of digital services such as electronic point-of-sales, enterprise resource planning, electronic payroll system, digital marketing, procurement, e-commerce and remote working.

He explained, “We offer a full suite of solutions for SMEs that want to go digital.”

Delivering connectivity to all Malaysians Celcom’s network resiliency initiative is crucial as the telco was also involved in the creation of the Jendela national digital infrastructure plan, which will provide 96.9% of populated areas with a 4G mobile broadband network.

To be done in phases between 2020 and 2022, Jendela will provide a platform for the transition to 5G in the near future under the 12th Malaysia Plan.

Jendela also involves a phased shutdown of 3G by the end of 2021. At the same time, the 4G network will be prepared for 5G.

“A lot of the 3G network today is being used for voice, and there’s a lot of migration that needs to be done to make sure that we can run on Voice-over-LTE (VoLTE), which Celcom has embarked on our 4G network, ” said Idham.

VoLTE allows high-quality voice calls and ensures the user’s phone stays on 4G even during a call.

“Most of the 3G users are in rural areas. We must reach out to this segment, in subscribing to the vision of Jendela and improving coverage for everybody.

“Moving forward, we want to do more for consumers who are impacted by the economic slowdown by offering more solutions and services that can help them to sustain themselves.

“Our ultimate aim is to ensure customers continue to get the best network – not just in terms of coverage, but also in performance, availability and resilience, ” he said.