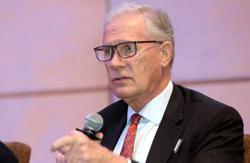 David Berry: Only when diversity permeates all levels in the organisation, is there a possibility of real and effective inclusion. It will be a long road, but the destination is rewarding

THERE’S a long road to travel from saying the right words to doing the right thing. It’s the journey from ethics to integrity.

The same applies to diversity and inclusion.

In 2010, Iceland was a pioneer in introducing a legal quota for gender diversity on corporate boards. Cleverly, the law required at least 40% of each gender to be represented on the boards of state-owned enterprises, public listed companies and even private firms with more than 50 employees.

The mandatory quota appears to work. Iceland and its Nordic neighbours lead the world in achieving gender diversity targets. All four nations register over 80% compliance.

However, the same cannot be said for equal pay or gender diversity across an organisation. Icelandic women are still paid significantly less on average than their male counterparts, despite there being equal pay laws since 1961. This suggests compliance is adherence to a narrowly applied quota.

Let’s look at the bigger picture and ask first: “Is diversity worthwhile?”

A 2018 McKinsey report found that companies with a more diverse leadership, measured either by gender or ethnicity, significantly out-performed in terms of profitability when compared with companies having lower leadership diversity levels.

So, how can we get there?

Buy-in from the organisation’s leadership is essential. “Tone at the Top” must not only sound good, it must also be reflected in actual behaviour in the C-suite. But, like a quota, it’s only a starting point. The whole organisation must be committed to change, at every level, for a broader diversity to be realised.

The long-term objective of inclusion is having everyone in the organisation feels as if they belong, as if they are appreciated, as if they can contribute. No-one should feel they are less equal, left out, or condemned to travel at the back.

This cannot be achieved simply by adopting a new hiring strategy which pushes diversity. It’s not only an HR issue; it’s about creating the right “whole-life experience” for every employee.

There is no template, or one-size-fits-all solution. Each organisation must craft its own way, be willing to accept and change what doesn’t work, and experiment with new ways which allow and encourage inclusion.

Of course, certain kinds of behaviour will be promoted and others frowned upon. But it must not be scripted or artificial. Room for the individual is vital, especially one who questions the status quo. There can be no room, however, for managers who are cardboard cut-outs of the “ideal”.

Consistent behaviour by leaders at every level will be at least as important in embedding an inclusive culture as formal training. When people see certain behaviour is effective and brings positive results, the natural instinct is to adopt that behaviour. If that behaviour is creative, rather than compliant, the process of change and inclusion is underway. The individual feels safe in taking the same course.

The organisation and its leaders need to be able to recognise those individuals that are bringing about change and applaud, so others can see and hear. Even when efforts are only partially successful, highlighting the good, asking what the next steps will be to reach the goal, and openly encouraging those can be very effective.

Around the world diversity is part of the new agenda. In Europe, companies must publish data. In the US, investors question diversity in the boardroom and elsewhere. The younger audience makes decisions against the backdrop of their own values, and how an organisation presents itself against that backdrop is an important consideration.

In many ways, taking account of stakeholder opinion is an essential part of the inclusion discussion for every company.

It is a question of when, not if, for this to become the norm in our part of the world.

The diversity debate needs to focus on a broader horizon than gender representation in the boardroom. The 2017 Malaysian Code on Corporate Governance encourages a broader view, but it has yet to be grasped to any meaningful extent. The 30% target for female board directors remains a token, therefore.

Diversity must include different skills, knowledge and experience, plus reflecting race, religion, socio-economic factors and age. However, diversity cannot stop in the boardroom or even the C-suite. That continues to be tokenism.

Diversity must extend to first and second-liners in all key organisational functions. Importantly, it must happen also at the “coal face” – line management, production and factory supervision functions.

Only when diversity permeates all levels in the organisation, is there a possibility of real and effective inclusion. It will be a long road, but the destination is rewarding.

David Berry is the managing director of Fidelius Sdn Bhd and the deputy president of the Malaysian Institute of Corporate Governance. Views expressed in this article are his own.