SIAK, Indonesia: Setiono Ono pauses his morning wildfire patrol near the northeastern coast of Sumatra island at a small timber dam between a logged area and an oil palm plantation.

Water the colour of charcoal is leaking out from the dam along a narrow canal cut to drain the surrounding peatland.

The dam, built by the local community here in the Siak regency of Riau province, is one of thousands of canal barriers constructed in recent years to protect Indonesia's peatlands, seen as critical in the fight against climate change.

“We need to fix this, ” said fire patrol leader Setiono, 40, before heading into the patchy forest with two other volunteers.

Peat accounts for about 3% of the world's land surface, but peatlands store more carbon than all other terrestrial vegetation combined, according to the International Union for Conservation of Nature (IUCN).

When peatlands burn, they release carbon into the atmosphere, accounting for almost 6% of the annual carbon dioxide emissions fuelling global warming, the IUCN says.

Indonesia is home to more than a third of the world's tropical peat, giving it a key role in safeguarding the carbon-rich ecosystem.

But in recent decades, its peatlands - 10 metres (33 ft) deep in places - have experienced rapid conversion into valuable commercial plantations to meet rising international demand for palm oil, pulp and paper.

That has helped lift small farmers out of poverty but also brought urgent environmental and public health risks.

Plantation trees fare poorly in drenched soil, so companies have dug thousands of kilometres of canals to drain off water.

But dissecting the landscape with these canals has dried it out and increased peatland fires, which smoulder underground for long periods and can often be doused only by heavy rain.

The threat is highest when climate patterns prolong Sumatra's main dry season beyond September, as in 2015 and 2019.

In 2015, fires burned about 2.6 million hectares (6.4 million acres) of land in Indonesia, an area 20 times larger than Los Angeles, about a third of it peat.

But in Setiono's village, there have been no fires since 2017 - which many here attribute to the former illegal logger.

After leaving middle school as a teenager, Setiono spent almost a decade of his youth cutting down trees and dodging tigers and police in the peat forest he now looks after.

He suffered frequent injuries and was hospitalised after a chainsaw slipped and tore through his thigh. Eleven other illegal loggers he knew were jailed.

He guesses he felled more than 100 trees in the forest near the leaking dam.

“For me this is strong motivation, ” said Setiono. “The bottom line is that I used to destroy nature.”

Setiono now heads the Masyarakat Peduli Api (MPA), or "Fire Care Community", for Rawa Mekar Jaya, a village on the north coast of Siak about 150 km (93 miles) west of Singapore.

Community fire initiatives began in Indonesia under pilot schemes in the early 2000s, before the government formally established the MPA programme in 2009.

At the peak of the 2015 fire crisis, state firefighters worked morning to night as power lines burned and schools closed for a month under a blanket of toxic haze.

A study by Harvard and Columbia universities indicated the 2015 air pollution could have caused 100,000 premature deaths.

Setiono heard about the community fire prevention programme that year and travelled to Pekanbaru, the provincial capital, for a month's basic training.

Five years on, he has built one of Riau's largest village fire brigades, with no dedicated funding.

Donated fire hoses and generators are stacked ready in a garden shed next to his red-brick bungalow.

Other equipment is stored a short drive away at the fire brigade's office, surrounded by dark sumps and pineapple plants.

“If there is a fire and smoke enters this village, then our children could become asthmatic," said MPA volunteer and father-of-two Suroso Lilik, 37.

The group convenes every morning to check on the 16,800-hectare area it is responsible for.

Its 25 volunteers work in shifts, patrolling the river on a small barge and traversing degraded fields on foot.

An hour's drive from Setiono's village, about 60 professional firefighters at the regional Manggala Agni (government fire brigade) headquarters are paid $200 a month for hazardous work on a climate-change frontline.

This year, amid the coronavirus pandemic, there was extra pressure to avert large-scale fires, as research linked air pollution to increased vulnerability to the effects of COVID-19.

Despite this, Indonesia’s environment ministry reduced its firefighting budget by about half to bump up coronavirus aid.

Fire chief Ihsan Abdillah said joint patrols in his sector, which the Manggala Agni conducts with the police, military and MPA groups, were cut to five teams this year from 15 in 2019.

But better coordination with communities has helped prevent fires sparking in the first place, he added.

“The Fire Care Community are very important - they are in position in the villages, ” he said.

A shorter dry season also helped limit wildfires this year, with official data showing a significantly smaller area of land burned in the year to end-September compared with 2019.

On a lane near the Siak coast, 43-year-old farmer Sahar prepared soil for planting with a hoe. “Many people used to burn land here - including me, ” he said.

But outreach by the MPA - combined with the risk of arrest - has helped convince farmers to stop using fire to prepare land for cultivation, he added.

“If anyone burns land, then Setiono and his team will come down here, ” said Ahmad Yunus, 44, an elected neighbourhood leader. “Everyone knows him.”

“In Indonesia what really works is when you empower the local community, ” said David Gaveau, a forestry scientist.

Herry Purnomo of the Center for International Forestry Research said the MPAs' strength is their grassroots support.

“The weakness is they don’t have sufficient budget or a clear programme to implement fire prevention and suppression, ” he added.

Indonesia has worked to reduce deforestation and wildfires in recent years, including banning development on peat and establishing a new agency to rehabilitate peatlands.

But green groups point to gaps in enforcement and unclear zoning, while land continues to burn on some plantations.

“It will be a success story if (other community firefighters) are supported, ” said Riko Kurniawan, head of the Riau branch of the Indonesian Forum for the Environment.

The dam Setiono found leaking is one of four built by the local MPA in a bid to rehydrate the peatland.

Setiono also leads a mangrove-planting project and has applied for a community forestry licence to sustainably manage the land nearby.

“We have done a lot of work with him, ” said Muslim Rasyid, community coordinator of the Peatland Restoration Agency in Riau. “But not every village has a Setiono.” 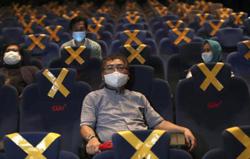 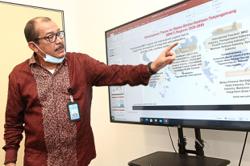