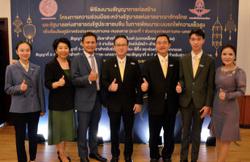 Bina Puri group executive director Datuk Matthew Tee said despite the difficulties faced by the construction sector due to the Covid-19 pandemic, the group would continue to secure new projects in both local and overseas markets.

's joint-venture company has won a RM1.03bil bid for part of the high-speed railway project to connect Bangkok to Nakhon Ratchasima.

The construction company announced on Wednesday its unit Bina Puri Sdn Bhd, through SPTK Joint Venture Company Ltd won the package under phase one for the Khok Kruat-Nakhon Ratchasima section.

“The contract value is 7.75bil baht (RM1.03bil). A total of 26 projects with approximate value of RM2bil have been completed by Bina Puri in Thailand since 2003, ” it said.

Bina Puri said the contract was expected to contribute positively to the earnings and net assets of the group.

“With the latest award, the group's unbuilt book order stands at RM1.9bil as at to date, ” it said.

Bina Puri group executive director Datuk Matthew Tee said despite the difficulties faced by the construction sector due to the Covid-19 pandemic, the group would continue to secure new projects in both local and overseas markets.

The State Railway of Thailand recently announced that SPTK JV Co. Ltd is the successful bidder for the project, which is a cooperation between Thailand and China.

The total length of the package is 13.68km, comprising a 12.38km railway route. It also involves building a new station (Phu Kao Lat station) and the renovation of an existing station (Nakorn Ratchasima station).

He said Bina Puri's foray into Thailand was in 2003 when it was awarded the construction of the access road for the Suvarnabhumi International Airport in Bangkok, Thailand with contract value of more than RM180mil.

Following this, the company secured a number of factory and warehouse construction projectrs, as well as repairs and upgrading for the Malaysian embassy complex.

The construction system used for these low cost housing was the Half Tunnel Form System which is fast and cost effective.