All 22 analysts in the poll expected Bank Indonesia (BI) to keep the 7-day reverse repurchase rate at 4.00%.

JAKARTA: Indonesia’s central bank is widely expected to keep its benchmark interest rate steady for a second straight policy meeting on Thursday due to renewed pressure on the rupiah currency, a Reuters poll showed.

All 22 analysts in the poll expected Bank Indonesia (BI) to keep the 7-day reverse repurchase rate at 4.00%.

This week’s policy meeting will be BI’s first after a panel of internal experts in parliament recommended a revision to the central bank law, which has raised analysts’ concerns that the BI could lose some independence and concerns over fiscal deficit financing.

The proposals and a reintroduction of social curbs in the country’s capital Jakarta to control Covid-19 outbreak, which came amid a host of global developments that prompted risk-off sentiment, have knocked some 2% off of the rupiah’s value this month.

DBS’ economist Radhika Rao said even as inflation was benign, pressure on the rupiah would keep the central bank from lowering rates. “BI might be reticent to use all the policy ammunition in the short term as well as prefer to retain buffer for the external balances, making the case for a pause, ” Rao said.

The central bank has cut interest rates four times totalling 100 basis points (bps) this year, on top of cuts in required reserves and looser lending rules, in response to the economic fallout from the pandemic.

It has also agreed to fund part of the government’s Covid-19 response by buying bonds and foregoing interest payments.

Meanwhile, Jakarta began a second round of movement curbs on Monday to control the coronavirus outbreak, which has overwhelmed its healthcare system. 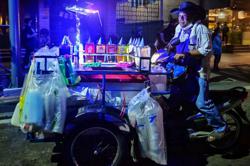