PETALING JAYA: The government’s plan to allow the foreign worker re-employment scheme is a positive development for MyEG Services Bhd, according to CGS-CIMB Research.

The brokerage said the development would improve MyEG’s job-matching business prospects and potentially leverage on its one-stop Covid-19 screening portal.

CGS-CIMB reiterated “add” on MyEG, with an unchanged target price of RM1.80, based on 24 times forward earnings.

“We see potential award of contracts for the Visa Luar Negara and National Integrated Immigration System (NIISe) projects as re-rating catalysts for the stock, while delays in the e-government service concession and failure to secure e-visa and NIISe contracts are key downside risks to our call, ” it said.

The Human Resources Ministry announced last week that the government would allow employers to rehire foreign workers who have lost their jobs recently but are still residing in the country with a legal working permit within the same sector.

There was a hiring freeze on foreign workers in Malaysia at the start of the movement control order in March, and it was supposed to be in effect until the end of 2020.

“Although the foreign worker hiring freeze had affected MyEG’s recruitment business, given that we estimate MyEG processes between 3,000 and 4,000 new recruits per month, we see the latest development of allowing the re-employment of foreign workers within the country as helping to reduce the impact from the hiring freeze, ” CGS-CIMB Research said.

“Moreover, MyEG’s foreign worker permit renewal business is not affected by the hiring freeze given that employers can still renew and extend their employees’ permits, ” it added. 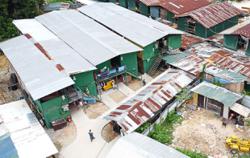