Brooks Brothers on verge of being sold

NEW YORK: Bankrupt Brooks Brothers Group Inc is on the verge of being sold to a partnership that includes the new owner of Barneys New York and one of the biggest US mall operators.

Sparc Group LLC, which is backed by Authentic Brands Group LLC and Simon Property Group Inc, is expected to be the winning bidder after rivals including WHP Global dropped away, according to people familiar with the sale process.

An official update could come as early as yesterday, said the people, who weren’t authorized to speak publicly before the announcement.

Authentic and Simon had previously disclosed they were bidding US$305mil in a court-supervised auction for Brooks Brothers’ global business operations. The sale would save at least 125 of the men’s clothing stores, while enabling Authentic to increase its collection of well-known retail brands and Simon to keep one of its mall tenants in business. Representatives for Brooks Brothers, Authentic and WHP Global, which owns the Joseph Abboud and Anne Klein brands, declined to comment. Simon didn’t immediately respond to messages left after regular business hours.

WHP, with backing from funds run by Oaktree Capital and BlackRock Inc, was originally named the lender on Brooks Brothers’ bankruptcy loan, which typically puts a lender in a strong position to become the new owner. But Authentic and Simon submitted a competing offer that Brooks Brothers annointed as the preferred “stalking horse” bid for a bankruptcy auction. The status came with a US$9.1mil break-up fee and up to US$1mil in expenses if they were outbid, according to court papers.

WHP complained at an Aug 3 hearing that Brooks Brothers ran roughshod over its bid, even though it was higher at US$334mil in cash, according to WHP’s lawyer, Gary Kaplan of Fried Frank Harris Shriver & Jacobson.

“For whatever reason, that’s been stalled, delayed, slow-walked, ” Kaplan said. With Brooks Brothers downplaying the value of WHP’s bid, and with US$10mil of breakup expenses to shoulder, WHP and the public company with which it was collaborating planned to revoke their bid if Authentic and Simon were approved as the stalking horse, he said.— Bloomberg 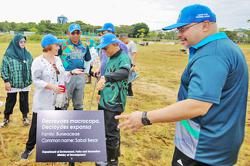