Under the enhanced framework, the MAS will consider granting an additional full banking license to foreign lenders which substantially exceed its Significantly Rooted Foreign Bank criteria, the central bank said in a statement.

SINGAPORE: The Monetary Authority of Singapore (MAS) said it plans to revise rules governing foreign banks with a substantial local presence that may allow them to open digital-only banking subsidiaries.

Under the enhanced framework, the MAS will consider granting an additional full banking license to foreign lenders which substantially exceed its Significantly Rooted Foreign Bank criteria, the central bank said in a statement.

“This will enable them to have the same flexibility as Singapore-incorporated banking groups to establish subsidiaries, including with joint-venture partners, to operate new or alternative business models such as a digital-only bank, ” the statement said.

Banks around the world have been shutting branches and moving their services online, a trend that will likely be accelerated by the Covid-19 pandemic.

Last year, the MAS announced plans to award as many as five new digital banking licenses to non-banks, a move that is expected to create a new generation of rivals for the traditional lenders.

The enhanced framework “will strengthen the ability of SRFBs to complement the local banks as anchors to Singapore’s financial system, ” the MAS said.

In order to determine if the foreign bank substantially exceeds the criteria, the MAS said it will take into account factors such as whether a significant portion of global key appointment holders are based in the country, the creation of a substantial number of jobs or counting a local group as a major shareholder.

The MAS also said that the local subsidiary of Standard Chartered Plc is the first bank to qualify as an SRFB.

Under the scheme, which was announced in 2012, Standard Chartered will be able to open as many as 50 places of business across the city state, of which 35 can be branches.

In a statement, Standard Chartered said it welcomed the move and would invest an additional S$5mil (US$3.6mil) to boost talent development and re-skilling.

The bank will review its strategy “with a view to invest more and further deepen our presence in Singapore, ” Patrick Lee, chief executive officer of Standard Chartered Bank Singapore, said in the statement. — Bloomberg 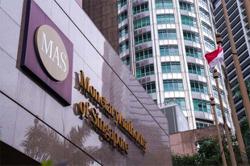