BERLIN: The German economy contracted by 10.1% in the second quarter, its steepest plunge on record, as household spending, business investment and exports collapsed during the COVID-19 pandemic, preliminary data showed on Thursday.

The statistics office said the plunge was the sharpest since 1970 and was worse than the 9% contraction predicted by economists in a Reuters poll. It wiped out nearly 10 years of economic growth.

"Now it's official, it's the recession of a century," said DekaBank economist Andreas Scheuerle.

"What has so far been impossible to achieve with stock market crashes or oil price shocks was achieved by a 160 nanometre tiny creature named Corona."

On the year, gross domestic product in Europe's largest economy declined by 11.7% from April to June, seasonally adjusted figures from the Federal Statistics Office showed. Analysts polled by Reuters had expected a 11.3% contraction.

Both exports and imports of goods and services collapsed in the second quarter of 2020, as did household spending and investment in equipment. But state spending increased. - Reuters 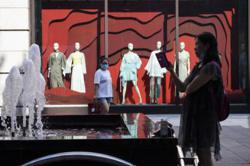