TOP Glove Corp Bhd’s prospects may remain intact. But the fact that two of its subsidiaries had been placed on US detention order list due to suspected use of forced labour has certainly dealt a huge blow to the company’s corporate image.

The first time was in 2010, when it was known as Ramunia Holdings Bhd. It had slipped into PN17 after it sold its Teluk Ramunia fabrication yard to Sime Darby Bhd

for some RM530mil. It got back on its feet in 2012 after being profitable for three consecutive quarters. But then in April 2017, the same fate befell THHE, as it slipped back into PN17 after its auditors had expressed a disclaimer of opinion on the going concern assumption in the audited financial statements for the financial year ended Dec 31,2016.

The company was also then facing numerous challenges including being banned by Petronas Carigali from participating in project tenders and also faced legal disputes.

But last year THHE saw a change in shareholding. The Finance Ministry (MoF)-owned Urusharta Jamaah Sdn Bhd (UJ) took over the close to 30% stake in THHE from Lembaga Tabung Haji.

The acquisition was part of the rescue plan for Tabung Haji which involved UJ buying Tabung Haji’s distressed assets.

Since the deal, UJ has helped THHE enter into a proposed deal to buy into another company called ICE Petroleum Engineering Sdn Bhd, which is involved in fabrication, mechanical engineering and installation works. THHE had said the proposed acquisition was part of its regularisation plan to revive its financial health.

However, it is left to be seen if THHE will go ahead with this plan. That concern comes after UJ saw the sudden departure of its CEO. Could this change have an impact whether THHE goes through with its ICE deal?

If so, then things could look iffy for THHE which has until October 22 to submit its regularisation plan. It has already been given several extensions of time by the market regulator.

’s prospects may remain intact. But the fact that two of its subsidiaries had been placed on US detention order list due to suspected use of forced labour has certainly dealt a huge blow to the company’s corporate image.

As the world’s largest glovemaker, there are expectations on Top Glove to be a leading example of good company values and culture. Hence, the company being caught to have unethical labour practices, regardless of how big or small is the problem, is rather disappointing.

The US Customs and Border Protection (CBP) in an e-mail statement said that through extensive inter-agency consultations it had found evidence of forced labour practices, including debt bondage among other practices in two of Top Glove’s units, namely Top Glove Sdn Bhd and TG Medical Sdn Bhd.

Both units have been placed on the CBP’s withhold release orders (WRO) list.

The US side says the WRO is to send a clear and direct message to importers that the illicit, inhumane and exploitative practices of modern day slavery will not be tolerated in US supply chains.

Top Glove, however, had earlier claimed the US move might be related specifically to recruitment fees paid by migrant workers to employment agents.

It says it is reaching out to the CBP to “understand the issue better and work towards a speedy resolution of the matter, within an estimated two weeks”.

Some take that as an indicator that investors remain confident that the company will be able to address the concerns raised by the CBP soon.

It is pertinent for Top Glove to rectify the issue at the quickest pace and work towards salvaging its corporate image.

IN the early part of the week, PDZ Holdings Bhd

denied that a joint venture with Sanichi Technologies Bhd was in the works to develop and operate a regional e-commerce logistics hub in Desaru Johor.

Yesterday evening, both companies issued statements to the exchange that they have formalised a collaboration to develop 234 acres into an e-commerce logistics hub. Sanichi will be responsible for design, construction and obtaining the leases to the land that belongs to government agencies.

PDZ’s will provide the technical expertise in the logistics management, infrastructure backbone including the information technology system.

The objective is to build the facility that serves as a regional hub for storage and with a regional network taking into account routes of ships.

The project is huge. It was earlier estimated at RM1bil and expected to lure investors from the US. However, PDZ has denied both the figure and speculation of new investors coming on board the company.

To be fair to PDZ, it did state that they were in discussion with Sanichi to develop a logistics hub as part of the efforts to diversify and expand its business. In its statement to Bursa Malaysia, PDZ was cautious to stress that the talks with Sanichi were merely in discussion stages.

Now that a collaboration has been formed, is it reason for PDZ to enjoy a new breath of life?

Certainly not as the agreement is very much in its infancy stages and there are still many things to firm up.

The movement in the share price seems to suggest that some punters knew that something was brewing in this otherwise mundane stock. 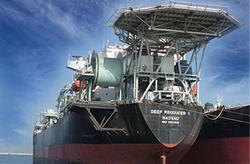